It’s Time to Say Goodbye to The Frontier 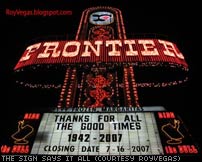 Though this picture by RoyVegas says July 16, today is actually the last day the Frontier will be open. As of 12:01 tomorrow morning, the doors will be shut forever on this Vegas landmark.

Recent years may have seen the hotel become extremely run-down, but there’s no denying that the Frontier was a vital part of Vegas’ growth and an integral part of the city’s history.

The first incarnation of the hotel opened on October 30,1942 as the Last Frontier Hotel, and it was the second hotel-casino on what is now known as The Strip. 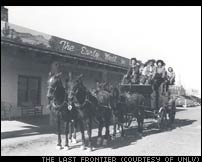 Built by theatre magnate R.E. Griffith, and his architect nephew, William J. Moore, it had only 107 rooms and it was the first themed hotel-casino in Las Vegas. As the name implies, the theme was the Old West, and the Last Frontier committed to it so thoroughly that they even sent a stagecoach to pick up guests from the airport, instead of using a car. The hotel also had the city’s first official tourist attraction, the Last Frontier Village, which was a mock small town filled with Western artifacts.

Thirteen years later, the hotel was demolished and replaced by the New Frontier Hotel. A year later, in 1956, the resort hosted Elvis Presley’s first Vegas appearance.

In 1964, the building was torn down again and during this reincarnation, the iconic Frontier sign was erected out in front, alongside the road to beckon travelers. At the time, it was the tallest freestanding sign in the world. Three years later, billionaire Howard Hughes purchased the property for about $14 million and changed the name to The Frontier Hotel.

In 1998, billionaire developer Phil Ruffin bought the resort for $165 million from then owner Margaret Elardi, who bought The Frontier from a company that was once owned by Howard Hughes in the late 80s. At this time, the name was changed back to the New Frontier, though it usually still referred to as just The Frontier.

Ruffin planned to build a $2 billion dollar jazz themed resort called the Montreux where the hotel sits, but when he couldn’t obtain the financing he first sold off 3.5 acres to Donald Trump for his twin Trump towers. Then in May of this year, he sold the rest of the property to the Elad Group, who are now closing the Frontier to make way for their upcoming multi-billion dollar Plaza mega-resort. 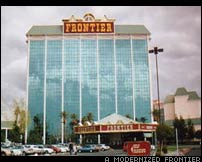 So if you want to visit this slice of Vegas history one more time, you have until midnight tonight to do so. And if you can’t make it to Vegas, RoyVegas is there covering the whole day in pictures.

You can also nab a slice of the Frontier for yourself when everything but the building goes up for auction on July 26th at 10am (PT). The auction will be held live and simulcast on the web by Great American Auctions. Items up for bid include signs, furniture, limousines, restaurant and bar equipment and even the gaming tables.

Do you have any memories or photos of the Frontier, in any of its incarnations? Please drop us a line in comments with your story or links to your blogs/photos.