Though the project is nearing its completion, MGM Mirage’s giant CityCenter announced today that it will be making some changes to the Harmon Hotel & Spa component. 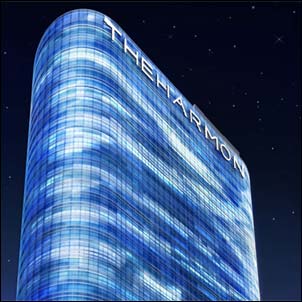 As originally conceived, The Harmon was to have approximately 400 rooms and suites, along with 200 residential condo units. However, with only 88 of those units sold, CityCenter Holdings, LLC has decided to cancel the residential component of The Harmon. Purchasers can choose to apply the funds paid towards alternate residences at the Mandarin Oriental Las Vegas, as well as the Veer and Vdara Towers.

The reason for this change in plans, according to an article in the Las Vegas Sun, is due to a combination of construction errors involving the rebars and false reports filed by the company overseeing the Harmon construction.

CityCenter says the cancellation of the residences at The Harmon will require them to also postpone the opening of The Harmon tower until late 2010, though they will finish the exterior on time for the rest of CItyCenter’s opening. But between the delay of the opening and the elimination of the residential units, they expect to save over $600 million in construction costs, so I guess all is not completely lost.

All other components of the CityCenter project remain on course to open in December 2009. These include the Aria Resort & Casino, the 4,000 room, 61-story centerpiece of the 67-acre vertical city, along with the Mandarin Oriental Hotel & Residences, and the residential towers of Veer and Vdara. The entire complex will be tied together by a 150,000-sq-ft casino, over 300,000-sq-ft of meeting space and Crystals, a 500,000-sq-ft retail, dining and entertainment district that is slated to be home to Cirque du Soleil’s Elvis-themed show.

All of this means in addition to hopefully drawing thousands of tourists to Vegas, over 12,000 jobs need to be filled before opening. CityCenter began accepting applications for these positions this month and if you’re interested in throwing your hat into the employment ring, head on over to citycentercareers.com.

CityCenter is a joint venture between MGM Mirage and Infinity World Development a subsidiary of Dubai World. It occupies the space between the Bellagio and Monte Carlo, formerly occupied by the Boardwalk.