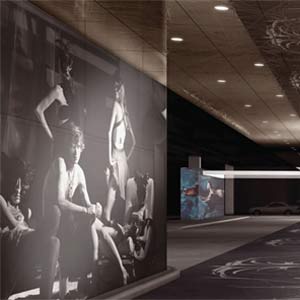 Thanks to the Hard Rock Hotel, we have a look at the entryway to the new Tower buildings that will be opening soon.

Those familiar with the original Hard Rock building know the entryway to the hotel is curved and open, like a regular hotel. The actual rock’n’roll theme doesn’t really start until you enter the hotel itself.

But in this first look photo rendition of the entrance as you first drive up, things look vastly different with the new building.

It’s done up in sleek tones of grey, accented by swirls of color. And as you can tell in the zoomed in image to the right, large photographic murals of models lounging around also enhance the rockstar vibe. I like it better than the plain old columns you see at most resorts.

Both the ceiling and floor of the driveway also feature a unique graphic design painted into them, almost as if to look like the ceiling is a mirror to the pavement below. Take a look at the zoomed out photo below and tell me if you wouldn’t be impressed driving up to this.

These new towers, when completed will add 550 regular guest rooms and a all-suite VIP tower with 400 suites to the Hard Rock Hotel. These towers are slated for a late-Spring/early-Summer 2009 opening and are part of the multi-million dollar expansion and renovation project that will be ongoing through 2009.