Even though the dust has barely settled on the 2005 opening of the Augustus Tower at Caesars Palace, the resort is about to expand again. 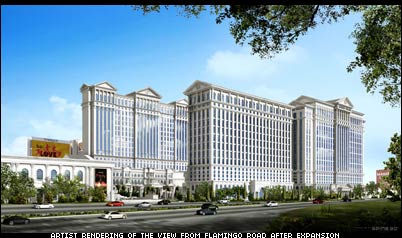 Parent company Harrah’s Entertainment announced plans this week for a $1 billion expansion of the property, which will include a new tower, a second meeting and convention center, a rebuilt pool area, a new poolside cafe, and a new wedding garden. As if that weren’t enough, plans also call for the complete remodel of both the Forum Tower and the Casino front entrance, as well as the buffet restaurant and the Race & Sports Book area. It will be the most expensive upgrade for the 41-year-old property.

The new tower will be named the Octavius, after the great-nephew of Julius Caesar, who later changed his name to Augustus. This 665-room tower will include 594 guest rooms and 71 suites in various sizes, including three pool villa suites. These expansive pool villas will reside on the tower’s second floor and will be more than 10,000-square-feet in size each. Luxury amenities planned for these suites include private butler service and private terraces overlooking the resort’s pool and garden area.

All of the new Octavius rooms will feature flat-panel TVs, clock radios with iPod docking stations, TVs embedded in bathroom mirrors and upscale linens. For extra privacy and security, floors 21 through 23 in the resort’s sixth tower will be comprised entirely of various-sized suites with special key card access required to visit these floors.

The $375 million Octavius Tower will adjoin the Augustus Tower, bordering Flamingo Road on the southeast corner of the property, and will raise the number of rooms and suites available at Caesars Palace from 3,348 to 4,013. It will also be adjacent to the new 263,000-square-foot meeting and convention center.

This two-story center, which will be connected to the resort’s Palace Tower meeting and convention center, features flexible meeting and exhibit space, as well as ballrooms and boardrooms. The upper level will offer a large terrace overlooking the new pool area.

Three new swimming pools will be built, replacing the Apollo pool and outdoor spas, and built on an elevated level to set them apart from the Temple, Venus and Neptune pools. One of these new pools will be available only to invited guests of the resort, while the other two will border the new meeting and convention center, allowing them to be used for private pool parties and catered functions from the center. A poolside cafe will be added, as well as a new garden wedding venue. 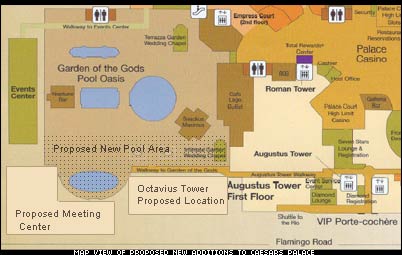 Harrah’s says they are estimating a completion date of first or second quarter 2009 for the new additions.

Several other areas of the resort will be updated and remodeled as part of the plan. The 24-story Forum Tower will be completely redone, including the suites. In-bedroom whirlpool bathtubs will be removed to increase the lounging and sleeping spaces. Each room will also receive completely new bed linens, flat panel TVs, iPod docking stations and giant marble surround showers with bench seating and both rain and regular shower heads.

Also slated for a change is the current Caesars Palace front entrance. The central ellipse will remain, but the ceilings will be raised 20 feet. New interiors will also extend to the casino floor, including the Casino Cashier and Cleopatra’s Barge corridors, and the remodeled restaurants. During the remodel of the central front entry, Caesars guests will enter and exit through resort entrances a few steps on either side of the central doors.

All of the remodeling is expected to be finished by the first quarter of 2008.

“Our guests have been thrilled with the Augustus Tower and its associated upscale services and amenities,” said Gary Selesner, president of Caesars Palace, at the news conference. “This new expansion opens an exciting new chapter in the renaissance that began with opening of The Colosseum, and continues with the February 2008 debut of Bette Midler’s all-new production, which will be presented a minimum of two years. With a spectacular new show, new guest rooms, suites and more, Caesars Palace will be well positioned to continue to welcome the world’s most discriminating clientele.”

The entire project is designed to make Caesars Palace more appealing to visitors who may be drawn to Vegas by the new megaresorts set to open in the next two to three years, like City Center and Echelon. Unfortunately, it may also cause room rates to rise at the resort.