In an effort to squeeze even more out of the properties they own mid-Strip, Harrah’s Entertainment has released plans to repurpose the empty walkway located between their Flamingo and O’Sheas properties. 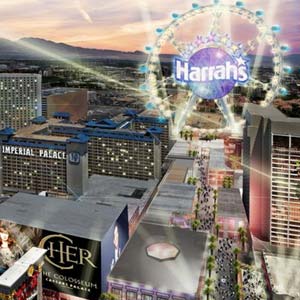 Dubbed “Project Link” the corridor between the properties would be filled with a pedestrian mall of sorts, consisting of restaurants and bars with open air seating and outside counters. Aimed at the mid-priced crowd, these establishments are described as being “mostly casual” – but what that means to Harrah’s hasn’t been made clear.

Also unclear is whether these establishments will be third-party vendors like TGIFridays and the like, or whether they’ll be operated as official Harrah’s entities. From a financial point-of-view, it would serve Harrah’s bottom line better to lease the space to others to operate and manage these businesses, and I’m sure there are plenty of corporate chains that would pay well for a slice of the Strip action.

But wait…it gets better. At the end of the walkway, Harrah’s is reportedly planning to build a giant Ferris wheel, similar to the London Eye, with large multi-person enclosed cars and a slow ride. The idea, I guess, is to compete with the Eiffel Tower and Stratosphere to offer aerial views of the Strip, but even at the proposed 600-ft height, what kind of view will it offer from the backside of property?

Considering Harrah’s is still deeply in debt from past and current projects and developments, it certainly makes sense to find ways to repurpose unused space like this. And with the economy the way it is, going after the mid-price consumer market is a smart thing to do, especially in light of the luxe CityCenter project opening nearby this year.

The question is, can they obtain the funding necessary to finance the project? The second question is can they find the right mixture of dining and beverage options to entice the sidewalk traffic they get in front of the Flamingo and O’Sheas to take that stroll down to the Ferris wheel?

What do you readers think? If they build it, will you go there? Or do you think they should put the money to use refurbishing some of their existing older properties?

At any rate, courtesy of Harrah’s Entertainment, here’s an artist rendering of what their “Project Link” will look like when finished: 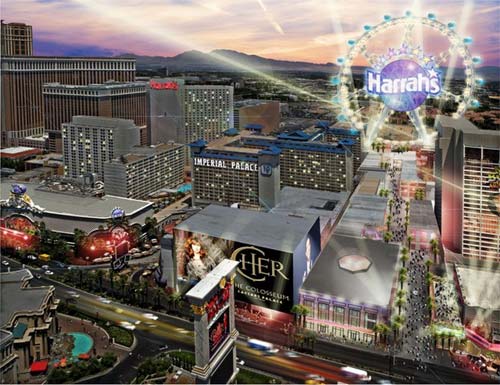 That’s the Flamingo on the right side of the image, with the Harrah’s-branded Ferris wheel at the end of the walkway.