With the stock market in flux and the US economy on a downward swing, it was expected that some of the current building developments would suffer a bit.

Here’s a look at some of the announcements made recently regarding projects in Las Vegas. 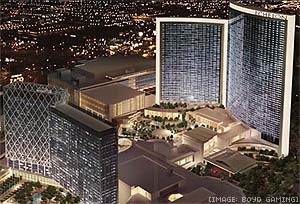 Boyd Gaming has decided to extend the hiatus on the start of the Echelon project to the end of 2009, a full eight months longer than previously announced in August 2008. The company is reportedly looking at possibly opening the project in phases or even altering plans for the size of the multi-use complex, which would have included the first Vegas location of the Shangri-La Hotel chain, along with a Delano Hotel, a Mondrian Hotel, and the Boyd-operated Echelon Resort. This postponement will definitely push back the opening at least another year past the original 2010 opening date. Perhaps they should’ve left the Stardust up a while longer. At least the construction site webcam is still operational.

In the spring of 2007, MGM Mirage bought up a parcel of land on the north side of the Circus Circus resort, which it already owns. Plans were to partner with Kerzner International, the company behind the Atlantis Resort chain in the Bahamas and Dubai, to develop a smaller version of CityCenter with an Atlantis-style hotel on the Strip. This month, MGM Mirage said it has frozen all pre-construction and design work on this north Strip location.

Meanwhile MGM Mirage is on track to complete the CityCenter project, with commitments for another $500 million towards construction costs. Latest reports include the topping out of the Aria Resort & Casino portion of the project and the Vdara logo being added to that resort building.

Company heir James Packer has resigned from the board of Australian company PBL Media, which has incurred a lot of debt from trying to finance Packer’s gambling acquisitions. Much of this comes from Packer’s failed attempt at what would have been the creation of the tallest building in America, the Crown Las Vegas resort. No word how this affects PBL’s recent buyout of the Cannery Resorts in Vegas.

Following the resignation of CEO John Bucksbaum, General Growth Properties says it is putting three of its malls on the selling block. But these aren’t just any shopping malls. The properties in question are the high profile Grand Canal Shoppes at the Venetian, The Shoppes at The Palazzo and the Fashion Show Mall. Considering two are in properties owned by the Las Vegas Sands Corp, it would seem they should be a likely buyer, but Simon Property Group, which owns the nearby Forum Shops at Caesars Palace, may be interested in buying the entire company.

To be honest, with all of the developments announced in the last two years, it was only natural that some would incur delays or cancelations, but it seems that even the Vegas Strip isn’t immune to the affects the current economy has on tourist-related projects. We’ll keep you updated as the reports keep coming in.