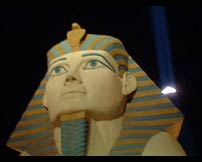 This morning, MGM Mirage held a press conference to officially confirm what many already suspected: the Egyptian theme prevalent throughout the Luxor was going to be removed.

MGM Mirage acquired the Luxor about two years ago, in an almost $8 billion purchase of the Mandalay Resort Group that also included Mandalay Bay and the Excalibur. But the company feels it’s time to let go of the Egyptian theme.

“We’re not a British museum with ancient artifacts, we’re a casino-resort,” said Luxor President and COO Felix Rappaport to reporters. “This was a brilliantly conceived building from the outside. The pyramid always created a sense of wow and wonder, but the inside never delivered on that promise.”

I can see what he means by that. Even though the outside Sphynx and the pyramid shape of the building are very visually interesting, some of the ways the theme was applied included just slapping an Egyptian name upon something, without really committing to the idea. It always felt to me like they did just enough to say it was an Egyptian theme, without really making the resort feel like you were in Egypt. For comparison, look at The Venetian, which does a remarkable job of immersing guests in the Italian theme, while still offering a luxury experience.

Already minor changes have been applied to the Luxor.

Nefertiti’s Lounge has been replaced by the more modern Aurora Lounge. The hieroglyphics on the casino’s indoor walls are also already in the process of being removed, and I’ve heard even wild rumors the Sphynx outside might be taken down. But I’m not sure how they could accomplish that without a major inconvenience to guests, since it sits right at the main entrance to both the resort and the courtesy tram to Excalibur and Mandalay Bay.

Over Labor Day weekend, LAX nightclub (an offshoot of the trendy celeb-filled hotspot in LA) will open at the resort, operated by the Pure Management Group. Two other lounges, Noir and Flight, are expected to open next to LAX later in the fall, as is Liquidity, the resort’s first bar in the heart of the casino floor.

Also coming this fall will be will the CatHouse restaurant/lounge, which will be under the direction of celebrity chef Kerry Simon (he of the Hard Rock Hotel’s Simon Kitchen). It will be located in the upstairs area above the casino where Isis and Sacred Sea once operated.

In addition to removing the Egyptian themed items, both the pool area and the Luxor Steakhouse will be remodeled next year. That is also the time frame given for changing over the resort’s atrium level into a more adult area, complete with the addition of more restaurants, lounges and entertainment venues. The 2,500 pyramid rooms will also be scheduled for a remodel, but no further details have been given.

But the one thing that won’t change is the name of the resort. Officials had toyed with the idea of changing the name from Luxor to something more generic, like “The Pulse,” but after reportedly consulting with focus groups, they have decided to leave the name as it is.

And yes, the laser light at the top of the pyramid will also remain intact.

When asked what prompted the company to initiate the changes, Rappaport replied, “We want our guests to visit Mandalay Bay and our sister properties but we also want guests from the other properties to visit Luxor, as well. We believe what is being added here will go a long way toward changing our image.”

So what do you think? Are you sad that Vegas’ slice of Egypt will be gone, or are you sick of everything Egypt and will welcome the change at the Luxor?