Despite large advance reservations for the upcoming end of the year openings of CityCenter’s Aria and Vdara hotels, MGM Mirage found itself in quite a financial crisis this week concerning the metaresort complex. 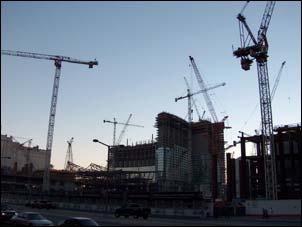 The joint venture between MGM Mirage and Dubai World had a $220 million payment due at the end of this month but up to the last minute it appeared it may not have the money.

This was due to Dubai World suddenly refusing to pay its half of the payment, as it filed a lawsuit against MGM Mirage this month claiming that by talking about its financial difficulties in the current economic market, MGM Mirage may have breached its agreement with Dubai World. It also said that it doesn’t want to continue to joint finance the CityCenter project until MGM Mirage can demonstrate it has the finances in place to hold up their end of the deal.

However, according to a statement released by MGM Mirage this week, they were able to work things out with its senior lenders for a payment of $200 million. This will allow construction on CityCenter to continue while the company seeks additional funding for the project.

In the statement, MGM Mirage also states it “intends to work with Dubai World, its lenders and others to find a long-term solution for the financing of CityCenter’s completion.”

Had MGM Mirage not been able to obtain the waiver and funding, it’s quite possible the CityCenter project would have had to file Chapter 11 bankruptcy.

The metaresort isn’t out of the woods yet, though. Both MGM Mirage and Dubai World need to chip in another $800 million in order to continue the project’s financing, and considering they’re still talking via their respective lawyers, one has to wonder if they can resolve their differences in time to do so.