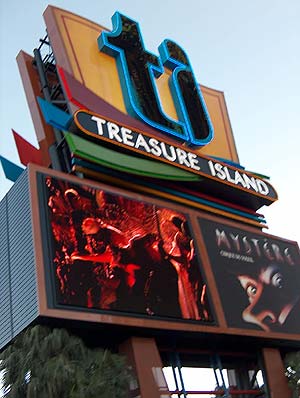 Ruffin, who formerly owned The New Frontier (aka The Frontier) before selling it to ELAD for their currently suspended Plaza Hotel development, is reportedly paying $775 million for TI. That’s less than the $1.24 million price he received for The New Frontier in July 2007. That resort was imploded in November 2007 and you can relive the moment by watching our video.

According to a press statement by MGM Mirage, the purchase price is to be paid at closing as follows: $500 million in cash and $275 million in secured notes bearing interest at 10%, with $100 million payable not later than 175 days after closing and $175 million payable not later than 24 months after closing. The notes, to be issued by Ruffin Acquisition, LLC, will be secured by the assets of TI.

Treasure Island, which is actually owned by MGM Mirage’s wholly owned subsidiary The Mirage Casino-Hotel, was acquired by the company when MGM Grand, Inc. and Mirage Resorts merged in May 2000. The resort, built in 1993, sits in a central location on The Strip and features 2,885 guest rooms and suites, approximately 90,000-sq-ft of gaming space and entertainment such as The Sirens of TI and Cirque du Soleil’s Mystere.

“We are very excited to be in a position to acquire such a stellar property in Treasure Island,” said Mr. Ruffin in the press statement. “The property is in pristine condition, ideally located in the heart of the Strip and benefits from a wonderful team of outstanding employees.”

News of the pending sale caused MGM Mirage’s stock price to rise 81 cents, closing at $11.50 on Monday. The sale must still clear regulatory and governmental reviews, but all involved expect that to happen relatively quickly with an planned closing by mid-2009.

No word has come from Ruffin as to his plans for the property, including what, if any, renovations may be made to property. TI recently underwent an $84 million makeover courtesy of MGM Mirage.