The Plaza Hotel in New York City is well-known for its luxury and hospitality amongst travelers to the city. Now, the ELAD Group, which owns The Plaza, is set on bringing their slice of New York to Vegas.

Sitting on the grounds where the Frontier once sat, The Plaza Las Vegas project is estimated at $8 billion and when finished, will be a multi-use property featuring an ultra-luxury hotel, private residences, casino, restaurants, an entertainment venue and a convention complex.

Initial artist renderings have the Vegas property sharing the external design of the New York property. Here is an initial look at the Vegas resort: 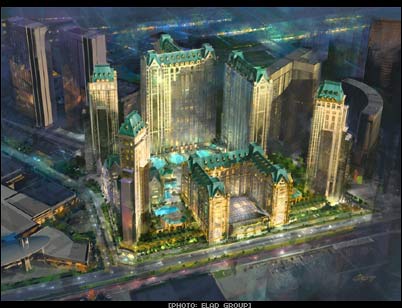 Compare that to a photo of the New York hotel: 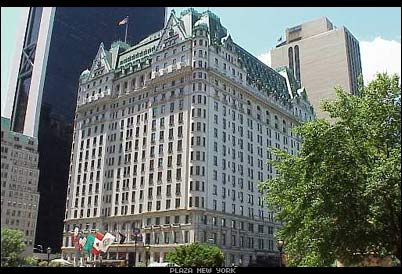 As you can see, both share a similar architecture, right down to the green angular rooftops. The design will certainly enable the property to stand out visually amongst all of the sleek modern-looking resorts currently being built on nearby properties.

“We are excited to bring The Plaza to Las Vegas,” said Isaac Tshuva, Owner of ELAD Group and The Plaza in New York, in a press statement. “The new project will exude the same elegance and grandeur that The Plaza in New York is known for. We look forward to becoming part of the Las Vegas skyline and will bring high quality service and excellence that is expected with The Plaza brand.”

Plans haven’t been finalized, and the name is currently being contested by The Plaza hotel downtown, which claims rights to the moniker in Vegas, but if all goes according to the company’s schedule, excavation work will start in the third quarter of 2008, with the opening slated for 2011.