Las Vegas continues to grow and evolve and here’s the news you need to know about the latest hotel developments and renovations. 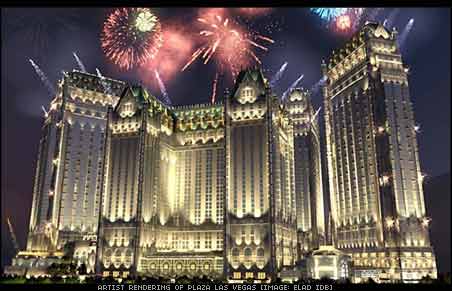 This means other than the issue of the final name for the resort, everything is green-lit for the company to begin building their multi-billion dollar project that would sit on the land formerly occupied by the Frontier hotel. That property was imploded in November of 2007.

The ELAD IDB project is set to have seven towers which will feature an ultra-luxury hotel, private residences, retail outlets, a state-of-the-art casino, destination restaurants, an entertainment venue and a convention complex.

The completion of the design and the start of the excavation is set to begin no earlier than the end of 2008.

Clark County commissioners have approved plans from DI Development Group, the new owner of the Greek Isles, to close the hotel-casino to make way for yet another new mixed-use development.

Plans for the 37-year-old property, formerly known as the Debbie Reynolds Hotel, include imploding the 14-story building to make way for two towers with 780 hotel rooms and a 77,000-sq-ft casino floor, along with space for retail, restaurants and a convention/meeting area. This would allow for the property, which sits on Convention Center Dr. almost half-way between the Strip and Paradise Rd, to fit in with neighboring developments such as the Fountainbleu and Crown Las Vegas.

No time frame has been given for the implosion or the projected opening of the new resort.

The hotel’s popular Rat Pack tribute show is not waiting for the wrecking ball, though. They’ve already moved to a new home at the Plaza hotel downtown where they now play Monday through Saturday at the hotel’s new Copa Room. Tickets are $49.99 plus tax and can be purchased at the hotel box office or by phone at 702.737.5540.