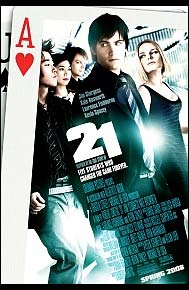 Looking for Hollywood glamour in Vegas? Then mark your calendars for March 12, which is when Planet Hollywood will host the star-studded red carpet premiere party for the movie 21.

The movie is based on Ben Mezrich’s book, “Bringing Down the House: The Inside Story of Six M.I.T. Students Who Took Vegas for Millions,” which is inspired by a true story.

In the movie, Ben Campbell (played by Jim Sturgess) is a shy, brilliant M.I.T. student who finds the answer to his tuition woes in the cards…literally. He is recruited to join a group of the school’s most gifted students on weekend blackjack trips to Vegas where, armed with fake IDs, they proceed to win millions from the casinos.

Led by math professor Micky Rosa (Kevin Spacey, who also produced the film), they count cards and employ an intricate system of signals to continuously grow their fortunes. Everything is rosy until Ben starts pushing the limits and comes under the radar of the casino’s head of security, Cole Williams (Laurence Fishburne). Kate Bosworth (Superman Returns), Aaron Yoo, Liza Lapira, Jacob Pitts and Josh Gad co-star as fellow students.

Also making appearances in the film are various Vegas landmarks including the Planet Hollywood resort (you can see the various light columns and other casino decor in some of the movie stills that are accompanying this article), The Venetian, Red Rock Resort and the Playboy Club at the Palms. 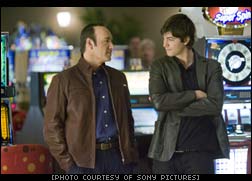 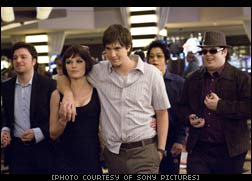 All of the stars of the movie are set to appear at the world premiere party, which starts at 9:30pm, so if you want to see any of them, I would suggest trying to find a viewing spot early. The event is actually occurring during the annual ShoWest movie theater industry convention, so it’s possible any number of other celebrities could show up for the red carpet stroll.

21 will be released by Sony Pictures in US theaters on March 28th. Until then, the studio and Trailer Addict have been kind enough to provide us with this theatrical preview of the film:

More still photos from the film: 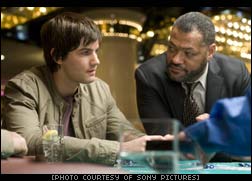 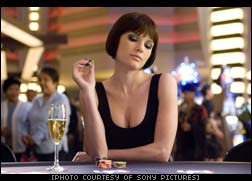 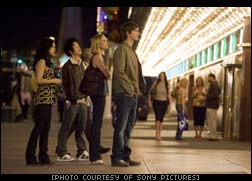 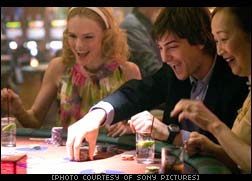