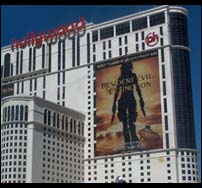 If you’ve driven the Strip recently, you may have spotted the two 30-foot banners advertising the movie Resident Evil: Extinction. What you may not know is the movie has taken over more than the outside walls.

The main casino floor hosts a display of the custom K 1200 R Sport BMW motorcycle used by the character of Alice in the movie. Other props and costumes are on display throughout the resort.

In another area of the casino, an entire blackjack pit sports Resident Evil-designed felts. Room keys bear film graphics and an entire channel in the guest rooms is dedicated to the upcoming movie, with promos and behind-the-scenes specials.

I’m told there are even Resident Evil-inspired menu items and drink specials at all of the hotel’s bars and restaurants, though I didn’t get a chance to check those out personally. Kinda creepy to think about zombies and fine dining together though, eh? 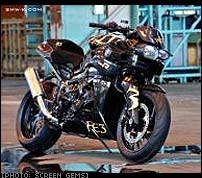 All of this is leading up to the exclusive red-carpet world premiere of Resident Evil: Extinction, which will be held at the resort this Thursday, September 20th.

For the event, Planet Hollywood has installed digital projection equipment along with a supplemental sound system and professional screen into its showroom on the mezzanine level of the property. Cast and crew from the film, including Milla Jovovich, Ali Larter, Oded Fehr, Ashanti, and Mike Epps, will be in attendance.

If you’ve caught my earlier stories on the film, you’ll know Vegas is one of the settings in the film…though it is partially buried in sand. As one of the characters in the movie states, the desert took it back. And in case you’re wondering, most of the Vegas set is CGI. Only the bottom portions of things like the Eiffel Tower at the Paris Las Vegas resort were actually built.

Planning to check out the red-carpet action yourself on Thursday? I would recommend getting there early to get a good viewing spot. With this being the first event of this magnitude at the resort, I’m not sure how they will be sectioning off the arrival lines.