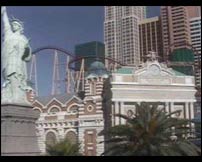 News is filtering in early this morning about a tragedy that took place at the New York-New York casino on the Strip.

It seems around 1am this morning, a man entered the casino from the walkway that connects the resort to the MGM Grand and opened fire, wounding four people before he was tackled by security and nearby patrons. Among those lending a hand were three off-duty police officers and two military personnel.

Two men and two women were taken to the hospital with non-life threatening injuries.

According to a police spokesman, it appears the shooter was aiming randomly at the casino floor below, and not targeting anyone in particular. They said the man is a Vegas local, in his 50s and they currently have no motive or reasoning for the seemingly random attack.

While this is a horrific incident, it certainly is something out of the ordinary and I think the quick thinking of the New York-New York’s staff and security prevented it from becoming something worse. More news on this as I get it, but feel free to leave your thoughts on the incident in the comments.