David Copperfield Under Investigation By FBI 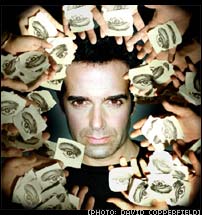 The raid occurred just hours after Copperfield had ended a sixteen day run of performances at the MGM Grand. The items were apparently taken by the FBI as possible evidence in a recent sexual misconduct charge that has been filed against the magician.

An unidentified woman is allegedly charging Copperfield raped her on his secluded Bahamian island in July, but no further details have been given. TMZ.com is reporting there was no rape kit done on the alleged victim in the Bahamas, and KLAS-TV in Vegas reported that the police in the Bahamas were never notified of this alleged incident until this week when the FBI stepped in. This essentially turns this into a “he said, she said” situation, unless the FBI uncover some evidence in the items that they seized.

Copperfield himself has remained completely mum on the subject, but this morning his lawyer, David Chesnoff, issued the following statement:

Copperfield is next scheduled to travel to Asia for shows, returning for another string of dates at the MGM Grand next month.