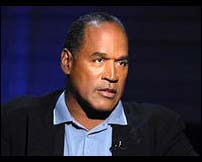 As if the saga of O.J. Simpson couldn’t get any stranger, today he was named a suspect in a confrontation that occurred at the Palace Station, just off the Strip.

Late yesterday, a break-in was reported at the casino. When the police arrived, they determined the incident involved sports collectibles and O.J. Simpson himself.

The former football star, who made even bigger headlines in the death of his wife and subsequent trial, claims in an Associated Press interview he did not break into the room, as accused, but was conducting a “sting operation” to collect items that belonged to him.

“Everybody knows this is stolen stuff,” Simpson said to the AP. “Not only wasn’t there a break-in, but [auction house owner] Riccio came to the lobby and escorted us up to the room. In any event, it’s stolen stuff that’s mine. Nobody was roughed up.”

Meanwhile, the alleged owner of the items, Alfred Beardsley, told celebrity gossip site TMZ that Simpson and Tom Riccio pretended to be customers who wanted to buy the suit Simpson wore when he was acquitted. Beardsley says the two men drew guns upon entering the room, and he was frightened for his life.

Simpson and several associates were questioned by the police, who say that they are still considering Simpson a suspect, pending further investigation.

There’s no word if the sports collectibles involved were part of the collection auctioned off by Simpson several years ago to pay some of the $33.5 million judgement awarded to the family of his slain wife in a wrongful death lawsuit they filed, or other items obtained via illegal means.