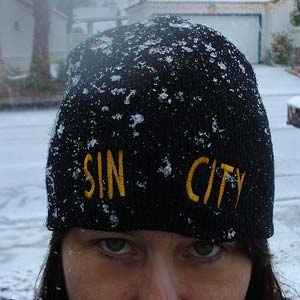 If you were in Vegas today (Dec 17), you may have thought you were seeing a mirage. Snow? On The Strip?

Well, it was no figment of the imagination. It really was a stick-to-the-ground type of snowstorm that so far has dumped up to 8 inches of the white stuff around Las Vegas.

According to the National Weather Service, this is the most snow the city has had in almost 30 years. Many people were out playing in it, throwing snowballs and making snow angels, and generally just marveling at the idea of snow in the desert.

Of course, it wasn’t all fun and games.

This rare record-setting snowfall affected flights in and out of the city, with McCarran Airport eventually being shutdown. According to the Review-Journal, the airport just isn’t equipped with snow removal or deicing equipment, making it extremely unsafe for the planes to take-off or land. If you have flights leaving through tomorrow, call ahead to make sure they are still scheduled.

The roads today weren’t much better, with some areas along the California/Nevada border, including I-15, being shut down due to ice and visibility.

Local kids are enjoying an occurrence normally reserved for those up north as Clark County School District is expected to close schools on Thursday (Dec 18). Some areas of the city were also without power tonight, though the main tourist areas of the Strip and Fremont appeared to be fine.

Winter sports fans are rejoicing, too, as nearby Mount Charleston is expected to have 11 inches on the ground by the time the storm tapers off tomorrow. Roads getting up there may be a bit tricky to navigate, though.

Sunshine should return to the desert for the weekend, but in the meantime, if you’re in Las Vegas, stay safe, warm, and inside, if possible. If you must venture out, leave yourself extra time to get to your destination, as roads will still be slick and icy through Thursday.

During the height of the afternoon snowfall, VegasConcierge posted this photo of the Luxor covered in so much snow the normally ebony pyramid was mostly white, like it was dipped in powdered sugar: 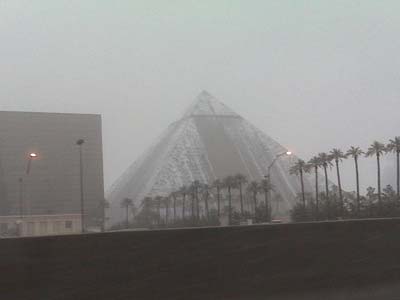 Can you imagine sledding down that? VegasCabbie also took a photo driving by on the I-15.

VegasBill had some fun and built a snowman at the iconic Welcome to Las Vegas sign: 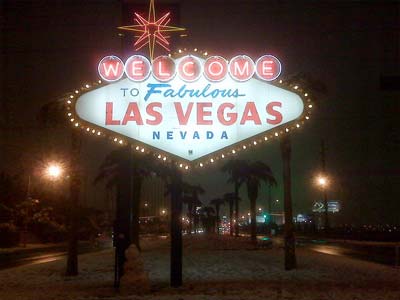 It’s kind of hard to see, but if you look straight down from the “Las” part of the sign, you’ll see it near the bottom of the photo.

Thanks to the credited photogs for allowing us to borrow their photos.

Were you out and about in the snowstorm? Leave us links to your photos so we can see them, please.