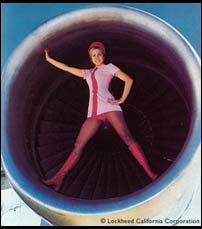 Carrie, over at our sister site Business Travel Logue, blogged this week about the current controversy involving Southwest Airlines dress code. The airline decided to play fashion police with passenger Kyla Ebbert, and it turns out she’s far from the only one. A recent CNN article cites another passenger, Setara Qassim, who had to ride the entire flight with a blanket wrapped around her because an employee thought her halter dress was too revealing.

My whole take on the issue is that while I get tired of seeing busts popping out of shirts and panty flashes from too-short skirts, I don’t feel Southwest has the right to arbitrarily decide what is too short or revealing on a passenger’s outfit. If they had a set of guidelines in place, that would be one thing. But the airline doesn’t – it’s up to the individual employee to decide what they will and won’t allow.

It’s the same way with the airline’s weight policy. It’s up to the individual gate attendant to decide who needs to buy an extra seat due to weight issues. Often times, they won’t even let the passenger try to sit in the seat with the belt fastened to prove they fit the seat.

While they’re at it, why don’t they do something about sitting next to a heavy smoker for hours, or someone who hasn’t bathed in days, or parents who let their kids scream and kick the seats for the entire flight. Why stop at just short skirts and the overweight? Maybe we should start having segregated flights so nobody is forced to tolerate another’s differences in close quarters for the length of the flight. Then maybe every one would be happy.

And why is it that I can’t get a sealed bottle of water past security, but the person sitting next to me can have her 12 inch long pointy-end knitting needles? Ok, enough of the sarcastic tirade.

Bottom line is that regardless of what the airline says, the way their employees confront the passengers can be psychologically intimidating. I’ve seen it done. You have to change your clothes or you can’t get on the plane…how is that a way to properly treat your customers? And this from an airline that used to require its female flight attendants to wear hot pants and mini-skirts (see photo above).

A set of passenger guidelines with specific requirements would be acceptable. Just pulling a passenger aside last minute is not acceptable (unless it’s a legal issue). Security issues are one thing, playing fashion police is another. And I as a paying customer will not give my business to an airline that randomly discriminates against its customers.

With the number of Southwest flights into Vegas every day, I’m curious as to what is your opinion on the matter. Sound out in our comments.