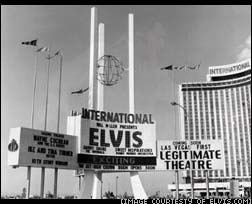 There’s no denying the fact that the histories of Elvis and Vegas will be forever entwined. As proof, tomorrow (Tuesday, September 18th), the ABC network will air a two hour special entitled “Elvis: Viva Las Vegas” at 9pm (ET/PT).

The ABC News special, produced in cooperation with Elvis Presley Enterprises, Inc., will examine how Vegas re-invented Elvis, at a time when critics didn’t think he had a chance, and how he in turn ushered in a new era for the city.

“Las Vegas needed a shot in the arm, and Elvis was the potion,” friend, co-star and fellow Las Vegas performer Nancy Sinatra tells ABC. “He got the young people in. And the young people helped to build a new Vegas.”

During the show, a multitude of recording artists will perform some of The King’s Vegas classics, including unique duets from Toby Keith and Aerosmith’s Joe Perry performing “Mystery Train,” and Chris Isaak with hot new artist Brandi Carlile performing “Love Me Tender” (filmed on the former site of the Aladdin Hotel, where Elvis and Priscilla were married).

Hosted by ABC News’ “20/20” anchor Elizabeth Vargas, the special will also air unreleased music and documentary footage of his Vegas years. Interviews with former wife Priscilla Presley and rare Vegas concert footage round out this look at Elvis in Las Vegas.

Whether you’re a fan of Elvis or not, this should be a very cool look at vintage Vegas.