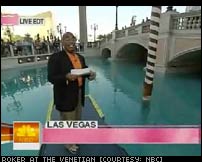 Did you watch NBC’s Today Show yesterday morning, with Al Roker anchoring segments live from The Venetian? Even though it was early by most standards (4am start time), it was obvious a good majority of people were still up from partying all night. And thankfully the earlier rains let off in time for the broadcast.

The excitement started with the “Running of the Brides” in St. Mark’s Square outside Wolfgang Puck’s Postrio restaurant as a group of prospective brides raced towards several racks filled with free wedding dresses. Unfortunately, Roker almost got trampled, as he started the race while standing directly in front of the group. Bet he won’t make that mistake tomorrow in Miami.

The wedding try-outs involved six couples who were given several tests, including singing on a gondola and a Vegas wedding trivia contest. All six won a prize of show tickets and dinner at the resort’s AquaKnox and The Venetian itself was showcased nicely. 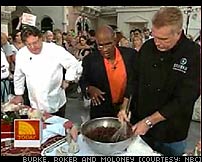 Geordie Brown, one of The Venetian’s headliners, did a live segment and squeezed in as many impressions as he could before Roker cut him off. Top Venetian chefs David Burke (executive chef of David Burke Modern American Cuisine) and Tom Moloney (executive chef of AquaKnox) demonstrated some recipes that would be good for a wedding, including mini-chocolate wedding cakes. Yum! Their recipes can be found online, if you want to make them at home.

There was also a pre-shot segment showcasing the variety of unusual ways to get married in Vegas, from a cadillac wedding to a helicopter wedding. The same segment also talked about the huge amount of bachelor and bachelorette parties, showcasing George Maloof talking about the Palms being a hotspot for the bachelors and then showing Sapphire’s male strippers and the Thunder From Down Under guys for the bachelorettes.

NBC has the individual segments up on their website in streaming video, if you missed the show or just want to watch it again. Once the first video starts, click the “Today Show” tab underneath the video player and links will pop up to view the rest of the segments. You may have to click on the page tabs at the bottom to find all of them, as they go chronologically.

Were you there for the taping? Let us know your thoughts in comments.