Vegas Celebs Once Again Populate Dancing With the Stars Roster

Earlier this summer, the Flamingo exchanged house chanteuse Toni Braxton for Marie Osmond and her brother Donny, who will open their new show next month. Braxton reportedly ended her contract with the resort early due to health concerns, but she’s obviously feeling much better now. 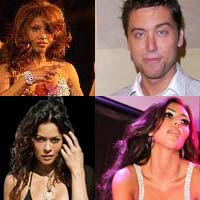 Why do I say that? Because it appears that Braxton is following in Marie’s footsteps and has agreed to be a contestant on the upcoming season of ABC’s hit reality show, “Dancing With the Stars.”

Yup, season seven of the show will find Braxton partnered with Russian dancer Alec Murro, who won season one of the show with soap star Kelly Monaco.

But she’s not the only Vegas regular who will represent on the upcoming season, which last year saw Penn Teller and Priscilla Presley competing for the hoofing glory.

Vegas club regulars and celebrity hosts Lance Bass (formerly of N’Sync) and reality TV host Brooke Burke will also be dancing in the competition. Bass will be paired with Lacey Schwimmer, a onetime “So You Think You Can Dance” finalist and the 2007 World Swing Dance champ who is making her debut on the show. Burke is paired with Derek Hough, who last season danced with actress Shannon Elizabeth.

Rounding out the Vegas foursome that will be in this season’s roster is the celebrity Vegas party girl/hostess with the mostess (er.. backside, that is), reality TV schmoozer Kim Kardashian. She is partnered with Mark Ballas, who won last season’s trophy with partner Kristi Yamaguchi. Kardashian is, of course, already creating drama by injuring herself right before rehearsals are scheduled to begin for the show.

According to TVGuide, Kardashian cut one of her feet on a mirrored hotel-room desk in New York City Sunday night, which might lead her to have to drop out if the injury doesn’t heal in time to undergo the rigors of dance training and competition. I’m not even gonna ask how she cut her foot on a desk.

“Dancing With the Stars” returns to ABC on September 22nd. So, who do you think will take it all this season?