Congratulations to Vegas headliner Donny Osmond for walking…or should I say dancing…away with the disco ball trophy last night on the season finale of Dancing With the Stars. 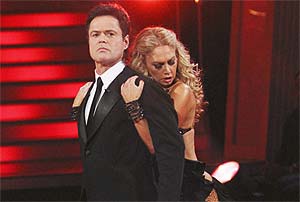 Though he wasn’t exactly a dark horse on the show this year, he certainly wasn’t originally a frontrunner to win. But with tenacity, dedication and a lot of fancy footwork, Osmond continued to wow both the judges and the TV voting audience with his dancing skills.

At 51, Donny is the oldest winner of the DWTS’s competition, too. Way to go Donny!

Appearing on The View today, when asked if he learned anything new from this experience, Osmond joked, “Yeah, I learned I have muscles in places I never thought of.”

No word yet if Donny will join the annual DWTS tour that happens at the end of each season, but you can still catch him and his sister Marie (also a DWTS alum) at the Flamingo. I’m told they will be performing a special Holiday version of their popular headlining show through Christmas. Perhaps we’ll get to see more of Donny’s winning footwork, too.

Beyonce‘s short four-night residency at the Encore Theater this summer has produced a one-hour TV special that will air Thanksgiving night (November 26, 2009) on ABC.

It was filmed on August 2, and is a shortened version of the new live concert DVD and CD that came out this week in stores, entitled “I AM…YOURS An Intimate Performance At Wynn Las Vegas.”

The TV special is culled from that DVD and will feature many of Beyonce’s biggest hits. Woven throughout the special are backstage moments, footage of her off stage life, and rare childhood video.

Here’s a video taste of the special, as Beyonce performs the song “Halo” live at the Encore Theater: 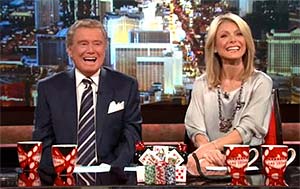 Speaking of the Encore Theater, morning talk show Live With Regis and Kelly has been airing its shows from the resort this week.

Thankfully, while in town, Kelly has been out and about, and the show has also featured segments of her with the casts of both Le Reve and The Beatles LOVE. She also revisited the Chapel of the Bells, where she and her husband got married over 13 years ago.

If you’ve missed any of this week’s Vegas hijinks, you can watch selected clips from each episode at the Live With Regis and Kelly website.

Even if you’re not a fan of Kelly Ripa, the video clips are interesting to watch, as they provide a fascinating backstage and behind-the-scenes look at both shows.