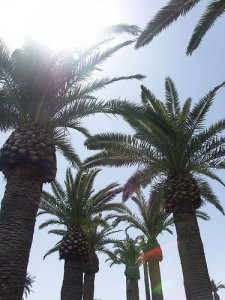 The weather in Las Vegas can be either a huge part of its appeal or the reason you’d never want to go, depending on the time of the year. Because Las Vegas is located in desert and in a valley, it can be exceptionally hot, especially in the summer. There is almost no humidity, however, so the “dry heat” that plagues the city is, for most people, much more tolerable than the humid conditions you might be used to.

Days may be hot, but many people are surprised to discover how cool it gets in the desert at night, especially during the winter.

The average yearly rainfall in Las Vegas is only 4.1 inches (10 cms), so you don’t need to pack an umbrella. However, if you happen to be in Las Vegas when it rains, be mindful that the city is prone to flash flooding. Should you be caught in the rain, drive slowly and avoid parts of the road covered by water. If you are walking, stay on the sidewalk and try to step inside if at all possible.

Believe it or not, it snows an average of just over an inch per year in Las Vegas, usually in January. The mountains surrounding the city and the west side of Las Vegas are more likely to see snowfall than the Strip or areas on the east side. Though there have been a few freak snowstorms in Las Vegas, it is much more likely that no snow will fall at all.

Perhaps the weather condition that will be most noticeable to visitors is the blustery wind, which often picks up during the fall and winter months.

>>More information about handling the rain in Las Vegas.

July is the hottest month with an average high of 104 °F (40 °C) and an average low of 79 °F (26 °C), and August is only slightly cooler. The city never has high humidity so these temperatures are exhilarating to most people at first. The only outdoor activities people tend to do in Las Vegas in the summer are walk to the next Strip hotel or sit by the pool, so heat is rarely a major problem. That said, it is essential that people remain well hydrated during the summer months as heat-related issues are among the most common medical problems during this time of the year.

>>More information about Las Vegas in the summer.

January is the coldest month in Las Vegas with an average high of 56 °F (13 °C) and an average low of 33 °F (1 °C). On average, there are 12 or 13 days each year that dip below freezing during December and January, although it’s not usually too cold for too long. It’s almost always clear with occasional wind storms, but you’ll want to bring a jacket or some layers to wear, especially at night. Be advised that if you travel to nearby Mt. Charleston, you will encounter snow, so boots, gloves and a winter jacket may be necessary.

>>More information about Las Vegas in the winter.

Many people believe that, weather-wise, spring and fall are the best times of the year to visit Las Vegas. February through April, October and November usually have warm, clear days and mild, clear nights. Summer really doesn’t give way to fall until early or mid October, but you can always count on five or six nearly perfect weather months in Las Vegas each year. It’s during these times of the year that visitors are most likely to find festivals and events planned around the city. These are also ideal times to play golf and engage in outdoor activities.