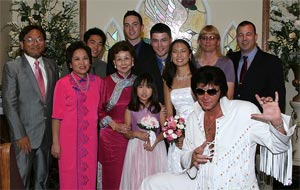 Every little girl in the Western world dreams of getting married in Las Vegas. Okay, that might not be true, but around half the folks who get married every year in Las Vegas are women, so something very interesting is going on here. About 120,000 marriages are held in Las Vegas each year, making it America’s busiest wedding city.

Las Vegas earned its reputation as the wedding capital of the world by making things fast, cheap, and easy to get hitched. There are wedding chapels located in most big hotels, and many more stand-alone chapels throughout the Las Vegas Strip area as well, with about 50 in total. You can have something of a traditional wedding at most of these places, but the city has become far more famous for the bizarre and themed weddings featured on most travel shows.

The Las Vegas Marriage Bureau is located Downtown and is open from 8 a.m. until midnight every day of the year. It used to be open 24 hours a day, but no longer.

There is no blood test or waiting period, and these things have made the instant weddings in Las Vegas so famous.

You can even fill out the Wedding License Application online to save time, but you have to print it out and bring it in with both people present at the office in order to get the license.

As mentioned, Las Vegas has lately become known for its bizarre theme weddings. The vast majority of weddings in the city are traditional type weddings, but these theme weddings are gaining in popularity and can be a lot of fun if everyone involved agrees in advance that they will be.

The King himself famously got married to Priscilla in Las Vegas at the Aladdin Hotel in 1967, and Elvis-themed weddings are the most popular of all the weird ones. Quite a few chapels, including the Aladdin Hotel Chapel and the Graceland Wedding Chapel, can have you married by one of the city’s many Elvis impersonators, but they all vary from there. You can be walked down the aisle by Elvis or have a Blue Hawaii themed wedding with an Elvis minister. The sky’s the limit.

The Venetian Hotel uses singing gondoliers as one of their main hooks, and they also have a wedding package where a couple, a witness, and their minister have the ceremony while cruising through one of their “canals.”

Similar to the above, but substitute canals and gondolas at the Venetian with a pirate ship at Treasure Island.

Okay, this isn’t a theme, but many of the city’s chapels will perform a commitment ceremony for same-gender couples. The Gay Chapel of Las Vegas is the only one where this is their specialty.

What could be more romantic than walking one block from the License Bureau to the Office of Civil Marriages? For $50 (plus the license) you can get married in a quick civil ceremony, but you’ll have to bring your own witness or recruit one from another waiting couple.