When most people think of Las Vegas, they probably don’t think of fish, flamingos and furry critters, but tucked among the casinos, restaurants and nightclubs are a number of aquariums, gardens and other animal habitats, all of which can be enjoyed by both adults and children.

Though the city isn’t home to a noteworthy zoo, you can get your animal fix by checking out any or all of these facilities.

Established in 1970, this non-profit organization is a safe haven for all types of animals. It exists to raise public awareness of responsible animal ownership, and it continues to survive through on-site classes about animal wellness, presentations and tours of the facility. Birds, llamas, goats, donkeys, pigs, reptiles … they’ve all lived at Gilcrease Nature Sanctuary at one time or another. 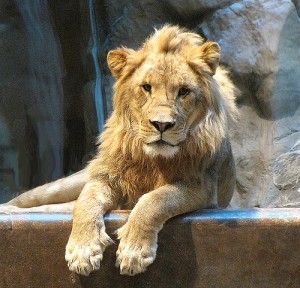 Arguably the best known animal viewing opportunity in Las Vegas, the lion habitat at MGM Grand is both a spectacle and a chance to learn about these majestic and graceful creatures. Housed in a large, multi-level environment with floor-to-ceiling glass panes and a walk-through tunnel, the lions on display here actually live on a large ranch located 12 miles from the city. During the day, however, the lions play, eat and nap within full view of the hundreds of people who come to check them out. Though the viewing opportunities are the reason to come, take the time to seek out the informational placards and listen to the audio recording to learn more about the animals.

>>More information about the lion habitat at MGM Grand.

If Flamingo Las Vegas didn’t have flamingos, it would be a shame. Luckily the resort has a dedicated outside courtyard garden with more than 300 birds, including several Chilean flamingos. This relaxed atmosphere is shaded and an ideal stop for those with kids as it gets some traffic but not nearly as much as other animal habitats on the Strip. In addition to the flamingos, there are also several swans, ducks, koi , pheasant and turtles as well. Arrive at 8:30 or 11:00 to see the animals being fed.

>>More information about the flamingo habitat in Las Vegas. 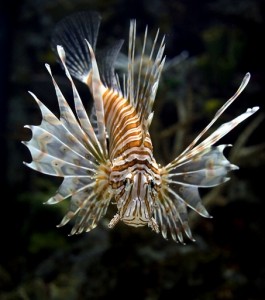 Mandalay Bay is considered to be the southernmost hotel on the Las Vegas Strip, and the Shark Reef Aquarium is located at the far south end of the property. This is North America’s only predator-based aquarium, and it’s possible to spend hours admiring the collection of piranha, rays, jellyfish, sharks and sea turtles. The aquarium also has a few golden crocodiles, which are actually quite rare. One of the highlights of the aquarium is a glass-encased walkway, which traverses the part of the aquarium housing the largest animals.

For a sneak peak of what the Shark Reef Aquarium has to offer (or if you don’t want to pay to see a few sea creatures), check out the aquarium in the lobby of Mandalay Bay.

The Aquarium at Silverton Casino Lodge

Silverton’s aquarium is best known for its showgirls dressed as mermaids who perform live underwater shows. This aquarium is one of the largest ones in Las Vegas, with 117,000 gallons of water and more than 4,000 creatures including tropical fish, stingrays, eels and sharks. An on-site marine biologist answers questions using a full-face communication diving mask during feeding hours.

This non-profit zoo is located south of the Las Vegas Strip, so you’ll need a rental car to reach it. Get up close and personal with several native and exotic animals. In addition to the petting zoo, Bonnie Springs Ranch is also home to horseback riding tours that are friendly for both adults and children. 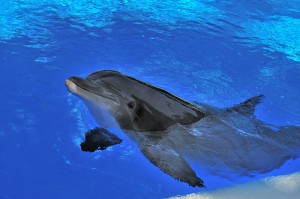 Siegfried & Roy’s Secret Garden and Dolphin Habitat at The Mirage

Siegfried and Roy haven’t had a show in Las Vegas for several years, but they are still committed to the preservation and protection of white tigers. The habitat at The Mirage was created as a facility for scientific research and education, so the animals there are not used for entertainment purposes. Rather, the purpose is to teach people about the creatures on site. Staff members interact with the animals in a safe and respectful manner, and they are trained and knowledge about all of the animals in the habitat, so take advantage of the opportunity to ask questions about the creatures.

In the main section of the habitat, there are several large dolphin pools. Ramps near the pools allow for underwater viewing opportunities. Beyond the dolphin habitats are the gardens that house the white tigers and other large cat species. There are placards strategically placed around the mammal habitat that provide background information on the animals. Though the critters are often asleep during the heat of the day, plan to arrive in the afternoon to see staff members interacting with the dolphins.

After your visit to Siegfried & Roy’s Secret Garden and Dolphin Habitat, stop by the aquarium in the lobby of The Mirage. This aquarium holds 20,000 gallons of water and 450 fish from 80 different species. Fish in the aquarium are fed twice daily.

Though the pool area at Golden Nugget is teeming with creatures of the human variety, there is one highlight here that focuses on wildlife. In this $30 million complex is a 30-foot tubular waterside that goes through an aquarium filled with a variety of sea life.