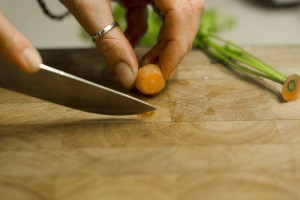 If there’s one thing Las Vegas excels in, it’s food. The city is packed with celebrity chefs and so many innovative restaurants that it’s hard to imagine being able to visit them all. It should come as no surprise, then, that Las Vegas is also home to several culinary institutes for those who’d like to make a career out of cooking.

For those who have an interest in cooking and baking as a recreational hobby, there are also opportunities to learn from the greats in a more relaxed, fun manner. No grades are given out, and sampling is encouraged.

One of the most popular places to take a cooking class in Las Vegas is Creative Cooking School, an institute comprised of a few professional chefs who teach those with a love for food how to cook certain dishes and match them with a selection of cocktails.

The class selection at Creative Cooking School changes monthly and is a reflection of what the chefs want to teach and students have asked for in the past. Some classes are consistently on the roster—Basic Knife Skills is taught nearly every month—and others show up seasonally. In the summer, look for barbecuing courses, and just about every Friday there is an appetizer and alcohol pairing class. These courses, which generally revolve around some sort of food or beverage theme, consist of several small dishes and an explanation about why certain foods match well with particular wines, beers or cocktails.

As expected, this is a very hands-on experience and welcoming to students of any cooking skill level. The rule is generally if you don’t help cook, you don’t eat. The menu for any given course is decided ahead of time, and each student is given a recipe book of the items that will be made (usually in the order that they’re made in the class). After putting on an apron, students are invited into the demonstration kitchen, where they are each given certain tasks for creating the dishes. No one is expected to make every dish on their own, and everyone takes an active role in making a communal meal. In most cases, everything is made on-site at the time of the class, though chefs will prepare items that need additional time in advance.

Due to the time constraints in any given class, students cook and learn at the same time. Time goes by quickly as one dish is prepared after the other. Downtime comes when students finally get to enjoy everything they’ve made over the duration of the course. Classes are kept to a manageable size so that everyone has an active part in the course, and the chefs are incredibly approachable and accessible. No question is off limits when it comes to cooking.

Classes are scheduled to run about three-and-a-half hours, though they often run a little bit over time as camaraderie in the kitchen and snacking on the creations creeps past the allotted time slot. That’s okay and encouraged, though, as it’s experiences like this one that offer a little more character and personality to a city that has the potential to move too fast.