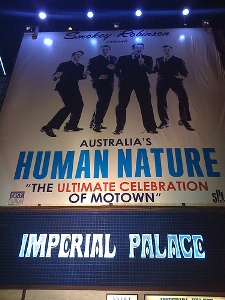 The Imperial Palace Las Vegas offers a wide range of entertainment opportunities guaranteed to keep you engaged and wanting to experience even more of the fun.

Japan’s “Muscle Musical” returns to the Strip after earning critical acclaim at the Riviera in 2006 and Sahara in 2007. The show transcends language with its unique costumes and performances.

There are shows every day at the Imperial Theatre. From Saturday to Thursday the show times are at 4 p.m. and on Friday at 8 p.m. Tickets are $49.95 and the VIP seats are $59.99. It is a good idea to reserve the seat ahead of time.

The 75-minute show features 18 Japanese athletes who amaze the audience with their display of energy and strength. The show started as a runaway hit Japanese television program and now has evolved to combine beauty, Japanese culture, music, acrobatic and strength to wow the audience.

It showcases the distinctive character and dynamic harmonies of the quartet. They are best knows for touring with Céline Dion and Michael Jackson. When that glamour faded, they relaunched as a group in 2005 with a Motown album.

Human Nature has been one of Australia’s biggest acts since 1995 debut. The band’s last four albums debuted at No.1 and their first American album will be released this year. They perform with a live band. The 80-minute show comprises timeless classics, such as a capella version of “People Get Ready” and a piano version of “Please Mr. Postman”.

The 75-minute show features an all star cast of superstar female impersonators who recreate the likeness of stars such as Britney Spears, Cher, Madonna, Beyonce and Dolly Parton. Every act features a No.1 hit from the diva. Some divas perform with back up dancers. Although all divas lip-sing their impressive performances make you believe that they actually perform live. And the audience is on their feet, singing along!