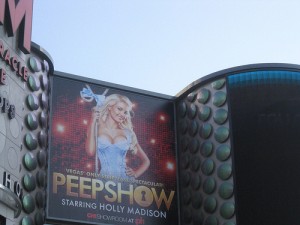 In addition to the bars and lounges at Planet Hollywood, there are a few other options when it comes to evening entertainment at this resort. One of the most provocative adult revues on the Strip can be found here, and a spacious entertainment venue lends itself to a variety of rotating big-name performances.

Since its opening, PEEPSHOW has been one of the most coveted adult revues on the Las Vegas Strip. Holly Madison, who is one of the premier icons of Las Vegas today, is the star of this show, which is a provocative strip tease set against classic childhood nursery rhymes. The show also features several women known for their roles in films and television as well as on Broadway. This high-energy show appeals to all audience members (18 years and older). Prices start at $65.00 (plus taxes and fees).

Planet Hollywood’s performance space is one of the best theaters on the Las Vegas Strip. It has been the host for red carpet movie premieres, today’s hottest musicians, cultural performances and award ceremonies such as the Miss America and Miss USA pageants. An ongoing line-up of performers means that just about anything could be playing when you’re in town.