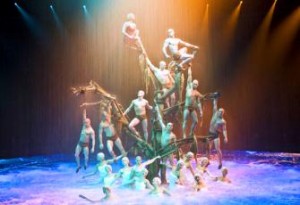 When considering the entertainment options of Encore Las Vegas, it really is best to think about what both Encore and Wynn have to offer at guests. The Encore Theatre is home to one of the Strip’s hottest musicians while those who head to Wynn will find an aquatic acrobatic show that rivals Cirque du Soleil.

Garth Brooks has been selling out shows since arriving at Encore. The show is a combination of Garth’s most popular songs and an intimate conversation between the musician and the audience. Occasionally his wife, county star Trisha Yearwood, also makes an appearance.

Ticket prices for Garth Brooks have increased to more than $200.00 per person due to popularity. Those who would like to see this show are advised to buy tickets in advance to ensure availability.

Concerts are generally Friday, Saturday and Sunday evenings at 8:00 p.m. with an additional show on Saturday at 10:30 p.m.

Check for available tickets to see Garth Brooks in concert.

When Garth Brooks isn’t performing, the Encore Theatre is often booked with other popular acts. These musicians and performers are usually booked around the holiday season and other busy times of the year, so check the calendar for the Encore Theatre before you arrive just to see who might be in town performing.

In the breezeway between Wynn and Encore is the theater for Le Rêve (“the dream”), an aquatic-based acrobatic performance that is not a Cirque du Soleil performance, despite common belief. Le Rêve is held in an intimate, round theater with stadium seating, so there really are no bad seats from which to catch this show, which combines water ballet and aerial acrobatics.

Tickets start at $99.00 for the splash zone and $129.00 for premium seating. For those who want more than just a show, there is a VIP Indulgence package available, which offers exclusive opportunities and experiences at Wynn. The resort offers Le Rêve dinner packages as well.