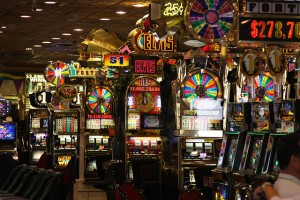 Megabucks is the most popular progressive slot machine in Las Vegas. It only requires $3.00 to win the jackpot, and the smallest possible jackpot is a whopping $10 million. It’s really no surprise that this game holds the record. The biggest the jackpot has ever gotten was $39,710,826.36, and it was won by a software engineer from Los Angeles who chose to remain anonymous.

It should be no surprise that the second biggest slot machine jackpot in Las Vegas history is also from a Megabucks machine, this time at the Desert Inn. The amount was $34,955,489.56, and the winner was Cynthia Jay-Brennan, a cocktail waitress. This win has given rise to a bittersweet Vegas legend. Six weeks prior to winning, Cynthia was rear-ended by a drunk driver. The accident left her paralyzed and killed her sister.

Would you believe that Megabucks also holds the third spot? This jackpot was $27,580,879.60, and it was won by a 67-year-old retired flight attendant. This was the first time Megabucks had surpassed $20 million, but the best part of the story was the retiree had won $680,000 on a Wheel of Fortune machine at the same casino the previous year.

At this point, we’ll stop being impressed by Megabucks. On March 27, 2002, 74-year-old Johanna Huendl went to breakfast at Bally’s. As she waited for her food, she played a few spins on the Megabucks machine and walked away with $22,618,156.67.

On June 1, 1999, a 49-year-old business consultant from Illinois walked into Caesars Palace and won $21,346,952.22 on the very first spin on a Megabucks machine. He hadn’t even planned to stay long, and even though he chose to remain anonymous, his story remains a Las Vegas legend.

This is another Megabucks win, another crazy story. Elmer had won $4.6 million in 1989 at the Mirage, and he vowed to hit it again. He finally did 16 years later at the ripe old age of 92.

A woman and her husband were staying at the ARIA Resort & Casino. They were in town for their niece’s birthday and hadn’t even planned to gamble much. While waiting one afternoon, she tried her hands at Megabucks and won the big one after spending just $6.

Most of the biggest jackpots in history have come from slot machines in Las Vegas. As online jackpots continue getting larger, it won’t be long before an online casino, and free slots make the list.