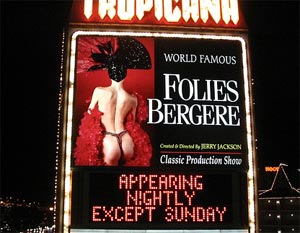 Glamorous showgirls have been synonymous with Las Vegas – and shows the Folies Bergere – have been popular in Vegas since nearly the beginning. And now with the recent explosion of new hotels and multiple showrooms at each, Las Vegas hosts a wide variety of shows that are suitable for adults only.

The new breed of shows still includes the Folies Bergere itself, but now there are plenty of different shows in different categories so it should be easy to find one (or one for each half of your group) that interests you. Some of them stress the classy side of slightly-erotic entertainment, and others feature strippers stripping with little in the way of a storyline to distract audiences from the skin.

Some of these shows don’t sell out well in advance like the headliner and Broadway-style shows do, but some of them do sell out in advance so if you have one in particular that you are interested in it would be best to buy tickets in advance. You can usually buy tickets through the hotel where the show takes place, but you can also book most shows online or over the phone. Vegas.com handles tickets to most of these shows.

5 of the better adult shows

Zumanity, The Sensual Side of Cirque du Soleil

This Paris-inspired show features a dozen nearly identical women who dance and serve as backdrops for artistic images cast over their nude bodies. Both the show and theater are replicas of an original started in Paris in 1951.

Thunder from Down Under

This all-male revue at the Excalibur features a cast of men from Australia who slowly but surely reveal all while having fun with the ladies in the audience.

This show debuted in Las Vegas in 1959 and here it remains at the Tropicana. The show is a tribute to beautiful French women of the 1940s, but modern elements creep in when the time is right.

This show at the Luxor features 8 of the most beautiful topless women you are likely to see in Las Vegas. Various male fantasies are played out in a setting meant to resemble a strip club.