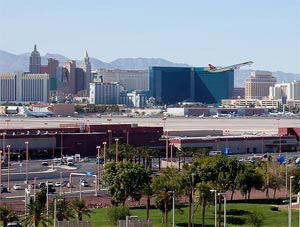 The only major airport in Las Vegas is McCarran International Airport (code: LAS), but this huge and ever-expanding airport ranked 6th in the United States for total passenger traffic in 2006 with over 46 million passengers, which also made it 11th in the world in that category.

This is actually one of the easiest airports in the United States to get low airfares into. We go into much more detail on the main Las Vegas Airfare page and the Las Vegas Deals page.

All major US airlines fly into McCarran, and that competition helps keep prices low. This is also the busiest airport for Southwest Airlines, which is a low-cost carrier mostly known for their short flights and low prices. It’s also the main hub for US Airways, which combined with America West several years ago, and their hub makes it easy to reach Las Vegas on non-stop flights from most of the United States.

You’ve got quite a few different options to get to and from the airport and hotels. If you’ve got enough people in your group, some of the pricier options might actually be better deals.

Las Vegas can actually be a good city to rent a car in since distances are great and rental prices tend to be low. You’ll find much more information on the Car Rental page.

Las Vegas is filled with taxis and they all run on the same meter system at the same prices. Up to 5 people can ride for the same price, so with a group of 3 or more this can be a pretty good deal.

You can rent a limo in Las Vegas for between $40 and $80 per hour depending on the size, but there are also many “limo companies” that operate out of the airport. They charge the same as the shuttle companies below, and in fact, usually you’ll ride in a shuttle (van) anyway. Occasionally the companies will use an actual limousine, but they cram it full of people stopping at different hotels, so it’s hardly the luxury it would appear to be.

If you don’t have more than 2 people in your group, these can be the best deal to get from the airport to your hotel. Many different companies compete for visitors just outside of baggage claim, and the prices and service tend to be similar to each other.

You can buy a round-trip voucher and save a bit of money, but it might not be worth it if your plans might change.

Some companies charge higher prices so shop around a bit if you want to save a couple dollars a person. The competition on those curbs is fierce, so the shuttle guys will often tell you to jump in as the shuttle will be leaving immediately, but then they’ll keep looking for people until every seat is filled. You can be sitting there for 20 minutes or more if you get unlucky, so try to find one that is nearly full if you want to go quickly.