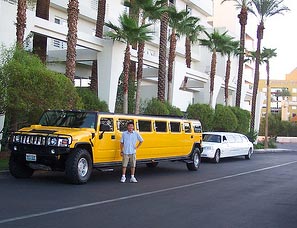 In most cities renting a limousine feels like you are going to the prom or trying way too hard to impress people, or both. But in Las Vegas all those worries are out the window because this is a party town, and limos can actually be very useful here, and even a cheap way to get around at times. There are plenty of companies competing for your business, so prices are often quite reasonable, although during special events and crowded weekends you might have to book well in advance just to get anything.

All Las Vegas limos are not actually limos

In addition to quite a few small limo companies, Las Vegas also has a few huge companies that handle all sorts of transportation options. Particular when landing at McCarran Airport, you’ll see several companies just outside of baggage claim, and their signs will mention limos, and you’ll usually see limos parked there. You might pay an amazingly low $6 for a “limo” ride to the Las Vegas Strip, and then they’ll point over to the big shuttle van you’ll actually be riding in. If you really want a limo ride, especially a private one, be sure that it’s actually a stretch sedan before you pay. 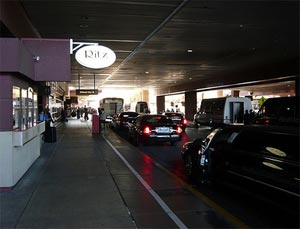 As mentioned above, actual limousines in Las Vegas can be reasonably priced due to all the competition, and you can actually rent one on the spot at the airport as long as they are not too busy, and you can reserve one in advance just in case. Prices for a stretch limo from the airport to the Strip start around $60 plus a tip for the driver, and you can get 6 to 8 people in the car, so if your group is big this is only a bit more expensive than getting two taxis. You can also reserve the large special limos in advance to be waiting when you arrive at the airport, but again, when getting them on a walk-up basis make sure you see the actual car you’ll be riding in before you commit.

This is a huge business in Las Vegas, and wedding parties tend to compete with bachelor and bachelorette parties for the cars each weekend. The drivers know all the chapels and all the Las Vegas strip clubs too, but if you are interested in the latter make sure you read that page for some eye-opening warnings regarding how you should get there. There are many options from which to choose and the easiest thing to do is get your own quote from a service that deals with several limo companies.

It seems unlikely that any other city in the world has this wide of a selection of “limos” to rent, and this includes every gimmicky one you’ve probably ever seen anywhere as well. These companies will provide a driver (in almost all cases) and a vehicle that ranges from a late-model sedan up to a full-on bus that seats 60 people. Among the more common ones are:

But there are larger and smaller options than these, and no one is going to make fun of you for renting any of them, unlike they’d probably do back home.