Dining Out in Las Vegas 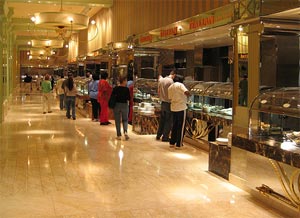 As recently as the 1980s you could eat practically for free in Las Vegas. The city was filled with all-you-could-eat buffets with insanely low prices that reflected the quality of the food you’d be heaping on your tray. Those days are mostly over. Las Vegas is now one of the country’s top dining destinations, with high prices that reflect that.

Finding cheap eats in Las Vegas is still pretty easy, but they don’t give it away like they used to, and now it’s also possible to find 16 Michelin-star restaurants in the city, including three two-star places and even one three-star restaurant.

Most large Las Vegas hotels still have buffets, but 99-cent breakfasts are long gone. The price and quality of the buffets tend to go hand in hand with the hotel they are located in. In other words, cheaper hotels, including most Off-Strip hotels, tend to have lower prices and generally lower quality. Breakfasts can start around $6 per person in some places, but $10 is more common on the Strip and $18 is what you’ll pay at the top places.

These buffets usually go from morning until late in the evening with few, if any, breaks. The price jumps as the new entrees come out, with most lunch buffets being in the $10 to $16 range and dinners going from $15 up to almost $30 in the nicer places. Again, you generally get what you pay for, so if you want quality you should look for a high price.

Most of the larger Las Vegas hotels now have a food court of some kind with at least a few different fast food options. Sometimes they are the global chains and other times they are small one-off places. So if you want a hamburger for $3 you shouldn’t have to go far. Some of the themed hotels have themed restaurants inside, like New York, New York has a New York-style deli and pizza place, but these tend to be much more expensive than the generic fast food.

Every large Las Vegas hotel has at least a couple restaurants, and most of the larger ones have up to 10 or more. They purposely try to provide something for everyone to keep you from leaving the property, so the larger places will have at least 5 or 6 totally different styles of restaurants in different price ranges. Quality at these places tends to be higher than at the buffets, and portions are usually large American-style helpings so you won’t go hungry.

You can find Mexican, Italian, seafood, Chinese, Japanese, and nearly every other major style of ethnic food if you look around a bit. It’s pretty easy to find a good dinner for around $10 at most hotels, just as it’s pretty easy to find a meal costing over $100 at most of the same hotels. If you want a trendy or famous chef and a high price, your choices are greater than ever. Quite a few of the famous TV chefs in America including Bobby Flay and Emeril Lagasse have at least one restaurant in Las Vegas, but often these places don’t serve food that quite lives up to the hype for fine diners. You can also find restaurants run by famous chefs who are more famous for their food than for making it on TV, including: Wolfgang Puck, Nobu Matsuhisa, Jean-Georges Vongerichten, and Alain Ducasse, among many others.

Alex in the Wynn Resort – This 2-star French restaurant with Executive Chef Alessandro (Alex) Stratta has a $150 3-course menu and a $200 tasting menu, but other dishes are less expensive.

Restaurant Guy Savoy in Caesar’s Palace – This is another 2-star French restaurant in a similar price range. Chef Guy Savoy also has several restaurants in France which also have the same high-end reputation.

Picasso in the Bellagio – Chef Julian Serrano gets two Michelin stars for this eclectic restaurant that combines French, Continental, Seafood, and Spanish cuisines.

Joel Robuchon At the Mansion in the MGM Grand – This is Las Vegas’s only 3-star restaurant. Executive chef Claude Le Tohic must be following Joel’s instructions pretty well for this French place to hit that dizzying height. Their Six Course Tasting Menu is $225 and their Sixteen Course version is $360 if you are a bit hungrier. Ooh la la!