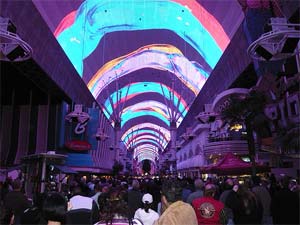 I was in Las Vegas a bit over a week ago and I headed to Downtown to see what the atmosphere was like. I’m not the main LasVegaslogue writer and I hadn’t been in the city in about 5 years so I specifically wanted to see what they’d done when they refurbished the Fremont Street Experience. After they covered Fremont Street in 1994 they added a sound and light show that runs hourly each evening, and I’d read that in 2004 they greatly improved it.

The old version was more Disney-like, or at least amusement park-like, with basic dancing shapes and whatnot, but in 2004 they made it higher definition with more lights and they call it Viva Vision. The sound system was enhanced as well, and I’m pleased to say the whole thing is quite amazing and really psychedelic. They could hold the world’s best rave Downtown now, if not for the fact that rave culture is pretty much dead and they seem to be struggling to get anyone Downtown, much less rave kids.

The show lasts only about 6 minutes and starts at the top of every hour in the evening, although the schedule does change a bit on certain days. There are many different themed shows, each with different light patterns and music. More information can be found on the Downtown Las Vegas page.

Below you can watch a 57-second video I took of my favorite show by far. If you think it looks cool on a video, obviously it’s infinitely better in person.