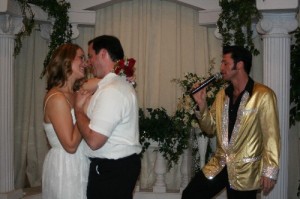 Las Vegas isn’t necessarily awash in visitors in February, but there is a surge over Valentine’s Day. Sin City draws not only couples on the most romantic day of the year, but also single people and those in town for a girlfriend getaway or guys’ weekend away. Somehow the city manages to cater to all of these crowds quite well.

One of the most popular things to do in Las Vegas is get married, and Valentine’s Day is no exception. Hosting about 120,000 marriages each year, Sin City is the busiest wedding city in the United States. Getting married in Las Vegas is cheap, easy and fast, but if you want to tie the knot on Valentine’s Day, make plans well in advance to reserve a chapel, limo, honeymoon suite or any other accommodations you might need.

When couples plan a romantic getaway to Las Vegas, they have a plethora of choices when it comes to choosing a romantic hotel, a sexy show, things to do and picturesque places to eat. Many restaurants offer special Valentine’s Day meal and drink specials, and several spas along the Strip offer deals on couples massages and treatments. If you want to go all out for your sweetheart, reserve an over-the-top suite, but make all of your plans in advance to avoid disappointment.

If you want to visit Las Vegas on Valentine’s Day but you aren’t one half of a whole, that’s okay. There are plenty of things to do if you are single or visiting the city with a group of friends to avoid Valentine’s Day. In addition to offering romantic packages, many hotels in Las Vegas also offer getaway promotions that include accommodations, show tickets to an adult revue (there are performances catering to men and women) and coupons or credits to bars and nightclubs. Speaking of nightclubs, this is probably the best place you can go if you are single and in Las Vegas for Valentine’s Day. Many of the clubs host themed nights for those going it alone on Valentine’s Day. They frequently offer complimentary admission to single ladies and cheap drinks or contests to help ease the supposed heartbreak of being single.

The most important thing to keep in mind about visiting Las Vegas on Valentine’s Day is that you won’t be alone. Thousands of people descend upon the city either to celebrate the most romantic day of the year or forget about it altogether. To make the most of your experience, make reservations for accommodations well in advance, and don’t forget to ask about any special promotions that are being offered through your hotel. Also, if you have a preference on dining, make reservations for that as well or expect to stand in a long line. Other than that, though, the city keeps on playing as it always does. Shows will be on a regular schedule, attractions will be open and the sun will (likely) be shining.