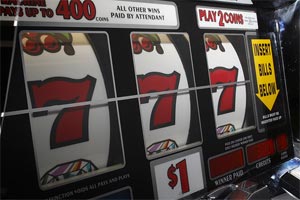 In the past, the only reason to travel to Las Vegas was because it was the only place you could legally gamble in the United States. At the time, there weren’t many things to do in Las Vegas.

Of course, this has changed over time, but gambling is still one of the most popular activities in Las Vegas. Even those who come for the food, pool parties or shows often play at least a few coins in a slot machine.

Types of Gambling in Las Vegas

Decades ago, slot machines were as much about interior decoration in the Las Vegas casinos as they were about making money, but they passed table games long ago as the biggest source of gaming revenue in the city, and now actually make up two-thirds of the total money won by casinos. They come in every imaginable shape and theme, and most no longer even have the handle on the side to activate the wheels spinning. The act of inserting and collecting coins is as good as history too; casinos realized this process takes up too much time, so they’ve now put most machines on credit and voucher systems.

>>More information on how to play slot machines

These games look like slot machines, but they involve some skill so they attract a different kind of player. They aren’t nearly as popular as their wheel-spinning brothers, but they are in every casino and are easy to find in large numbers.

Blackjack/Twenty-one – This is the most popular table game. It is an easy game to learn and even master. Card counting isn’t nearly as difficult as movies make it out to be, but winning consistently by doing so is nearly impossible anyway.

>>More information on how to play blackjack

Roulette – This simple and historic game is easy to play because it’s impossible to be good or bad at it. Every spot on the table carries the same risk/return ratio. Casinos have installed boards that show all the recent numbers hit as a way to sucker naïve players who believe in streaks to bet even more.

>>More information on how to play roulette

Craps – Just behind roulette in popularity, this dice game is intimidating because it’s not easy to learn and the lingo can sound purposely confusing. This can be one of the most exciting of all table games since generally all the players win or lose together, unlike twenty-one or roulette.

Baccarat – This game isn’t as popular as others, and it’s almost always a high-minimum game in a special room when you do find it. Las Vegas casinos actually make more profit off baccarat than off craps and roulette combined, due to the high stakes.

>>More information on how to play baccarat

This is the only of the table games where players aren’t playing against the house but playing against each other. The annual World Series of Poker packs thousands of players into the Rio off the Strip. Most casinos also have poker rooms.

Most casinos offer a few additional table games for people who like something new and different. The most popular ones are:

Several of these games are similar to other games you know, but with slightly different rules. In general, these games tend to have high profit margins for casinos because most players don’t know proper strategy.

In Nevada, you can bet on nearly any event that is contested on a field of play that is outside of Nevada. Football and basketball are the most popular, but betting on baseball, hockey, golf, tennis, and other sports is also available in season. Despite what you might have heard, you can’t bet on Academy Award winners or American Idol winners or anything else that isn’t contested on a “field of play.” A few casinos put up odds for entertainment purposes, but you can’t actually bet on these things.

The declining sport of thoroughbred horse racing still has legions of fans among Las Vegas visitors. Most large casinos have a big race book facility inside, where players can bet on every race at large tracks in the country and even some smaller tracks when the big ones aren’t running. You can also bet on quarter horses, harness horses, and greyhounds in Las Vegas, though those tend to be popular in evenings and during off hours.

This bingo-type game is a terrible bet for players, but it’s found all over. It’s easy to play while eating or drinking in a casino restaurant or bar so it remains reasonably popular.