This upcoming Labor Day weekend will set the record for high profile club activity in Las Vegas. Not one, but two new Las Vegas nightclubs are opening their doors. Another is closing as one holds off on closing for just a little bit longer. And the rest are simply bringing in the biggest names they can to lure in party-goers. 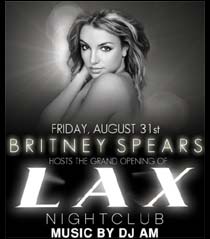 The highest profile opening has to go to LAX at the Luxor. This new club by Pure Management Group is a transplant of the hip LA club of the same name, but with the wow factor upped considerably. Massive arched wrought-iron gated doors sit at the entrance, in front of two curving staircases that lead up to the first level of the club. The DJ booth is on hydrolics, so it can raise and lower, allowing everyone in the club to see the booth. Add in enormous black chandeliers, cabana lofts for VIP and two giant candle-lit marble and glass bars and this is sure to look like nothing else you will see in Vegas. The grand opening party will be hosted on Friday, August 31st, by none other than Britney Spears, who is sure to bring a slew of paparazzi and news shows with her…provided she shows up and actually works the opening. LAX will also have DJ AM spinning on Friday, with Steve Aoki spinning on Sunday.

At the other end of the Strip, will be the lower-key opening of Blush at the Wynn. This boutique nightclub, located where the Lure nightclub once stood, is smaller than most nightclubs in Vegas, but what it lacks in size, it intends to make up in a higher level of personal service and luxury touches. The club features a lit onyx dance floor and a creme lantern ceiling sculpture, surrounded by seating banquettes, an open-air patio and outdoor seating surrounded by lush foliage. Red 8 will serve Asian appetizers from 5-9pm nightly but while they intend to draw on Vegas’ top DJs for the weekend, they will not have any hired celebs at their opening. They feel their concept of the intimate lounge-nightclub hybrid is unique enough to draw those sick of the mega-clubs.

Closing after this weekend will be Light at the Bellagio. As reported earlier this week, the club will be undergoing a renovation, and possibly even a re-theming, so this will be your last weekend to enjoy the club as it has been for the last six years. But not closing this weekend will be Tangerine. Even though they will still be going through with their Dave Navarro-hosted party Saturday, September 1, the club will not be shutting its doors after a last minute reprieve. With news of Light closing, I’m betting Tangerine is being kept open to capture some of the business lost by Light.

As for the rest of the hotspots in town, here’s a rundown of who you can expect to see hosting club nights this holiday weekend:

Whew! I predict a LOT of hungover people at the casinos this weekend. If you’re out and about partying, drop me a line in comments and let me know what you did.

For other events happening this weekend, check out our daily Vegas events calendar.