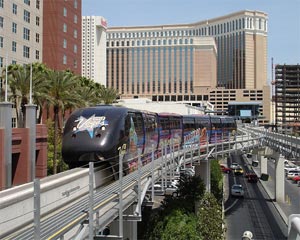 If you’re looking for the cheapest way to get up and down the Las Vegas Strip, you’ll probably want to take the Deuce, the public bus that runs the length of Las Vegas Boulevard and into downtown. But if you want to get somewhere quickly and enjoy the ride on the way, you may want to hop on the Las Vegas Monorail, which runs north along Koval Lane and Paradise Road.

After years of problems and delays, the Las Vegas Monorail began offering stable service on its four-mile route in 2005. Many people ride the Monorail as a form of entertainment but many others use it as a form of transportation, which can be especially useful during the city’s sweltering summers.

The traffic on the Las Vegas Strip sometimes moves at sub-pedestrian speeds, so the fast and air-conditioned Monorail may especially be worth the money during these times. There are cheaper methods of transportation in Las Vegas, but if you’ve got four wheels, you’ll be stuck in the traffic. Not so for those who opt for the Monorail.

The Las Vegas Monorail has seven stops, starting with the MGM Grand Station near the south end of the Strip to the Sahara Station, located on the north end of the Strip. It makes stops at the Hilton, Las Vegas Convention Center, Harrah’s / Imperial Palace, Flamingo / Caesars Palace, and Bally’s / Paris. People who are in town attending a convention find the Monorail particularly convenient.

In the past, there have been discussions about extending the Monorail north into downtown Las Vegas and south to McCarran International Airport, but no ground has been broken for either project, so if this ever happens, it is a long way off.

The stops from north to south:

Traveling the Monorail route from one end to the other takes 15 minutes, and delays are rare. Trains arrive every 4-12 minutes and usually every 5-6 minutes during peak periods.

Nevada residents can purchase Monorail tickets at the station booths for $1.00 per ride with a valid Nevada driver’s license.

Children 5 and under are free.

You can buy tickets in advance online on the Las Vegas Monorail website and have them mailed to you, but you can also buy them at the stations. Each station has a touch-screen ticket vending machine that accepts cash and credit cards (no extra fee). Ticket sellers in booths at the MGM Grand Station and Sahara Station can assist with questions between 11:00 a.m. and 6:00 p.m. every day.