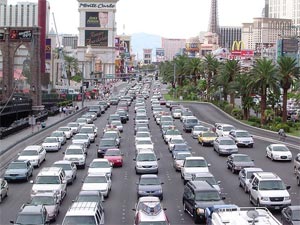 The Las Vegas Strip can be deceiving. What looks to be only a short distance away is often much further than you anticipated. In fact, the distance from Mandalay Bay to Stratosphere is almost five miles! If you don’t mind walking, Las Vegas is easy to explore on foot, but you can see a lot more in much less time if you rent a car or utilize some of the other ways of moving around.

>>Find information about McCarran International Airport and the airport shuttles.

If you just want to see a few other casinos around the city and maybe visit downtown, renting a car probably isn’t worth it. Parking at hotels can be a hassle, especially if there’s a convention or big event in town. Most have complimentary parking garages, and several have free valet parking too, but you often have to wait so long for your car that you’d be better off in self-parking anyway.

However, if you plan on visiting more than just a few other hotels and would like to explore more of the city and surrounding area, renting a car in Las Vegas is the way to go. The Red Rock Canyon area is only 15 miles away, but Lake Mead, Hoover Dam and the Grand Canyon can also be incorporated into a Las Vegas vacation if you have your own wheels.

Priceline, RentalCars.com and CheapCarRentalLinks.com are three online sites that can help you find the right rental car for your time in Las Vegas.

Taxis are everywhere you look in Las Vegas. Finding an empty one is as simple as signaling to a hotel employee out front that you’d like one, and he signals one at the front of the line to ease up to where you are standing. Sometimes it can take a while to find an open taxi, such as right after a big show has let out or during a busy holiday weekend, but that’s rare.

Prices aren’t too cheap, but you pay per ride, not per person for up to five passengers so if you have more than two people, the taxis can be a bargain. Going from the south Strip to downtown is the furthest you’ll need to go and that will cost around $20 total, but there can be a catch with paying by distance:

Traffic in Las Vegas—particularly along the Strip—has gotten so bad in recent years that pedestrians can get from one hotel to the next more quickly than the logjam of cars in the street can. Cab drivers obviously see this before you do, so they’ll find a back way that might be a couple miles out of the way in order to save time. You can trust them when they do this because they are usually not trying to rip you off, but rather to get you where you are going for less money, where they can pick up their next fare.

So if the Strip is packed and cars aren’t moving, a taxi ride could cost more and take longer than it would at other times of the day, but it still might be worth it.

>>More information about getting around Las Vegas by taxi. 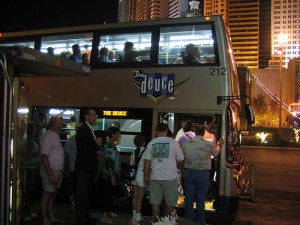 There is a public bus system in Las Vegas that serves both locals and tourists. The buses on and near the Strip are more frequent (approximately every 15 minutes) and expensive; those off the Strip require longer wait times but cost less. Buses on the Strip run 24 hours, though expect to wait about half an hour for one late at night.

Because Las Vegas has been smoothing out its bus system, the price of tickets has been changing. There are vending machines for ticket purchase at the bus stations but they do not give back change. In addition to single-ride tickets, there are 24-hour and multi-day passes. Because the bus must navigate traffic, it might take longer to get where you’re going but you’ll probably arrive with more cash in your pocket than if you take a taxi or the monorail.

>>More information about riding the bus in Las Vegas.

There used to be a bus that resembled a trolley that ran up and down the Strip for a few hours every day. This is still exists, but it is now owned by Open Top Sightseeing, and it isn’t something you’ll want to use for casual transportation. The morning trolleys take off from Circus Circus at 9:54 a.m. and MGM Grand at 10:00 a.m.; the final trolley leaves MGM Grand at 10:00 p.m. Trolleys pass by each of the 17 stops approximately every 30 minutes, and you can hop on and hop off as you wish. The entire tour is two hours.

Tickets are $35.00 and are available for purchase online, on the trolleys at select hotels and at visitor information desks. They are valid for two days. Keep in mind that these trolleys are much slower than the crafty taxi drivers when traffic is bad. More information is available on the official Las Vegas Strip Trolley site.

If you like showing off or if you’ve just won big in the casino you can easily rent a limo in Las Vegas. Prices range from $40.00 to $80.00 per hour depending on the company and the car. Ask at the airport or at your hotel and they’ll call for the car of your choice.

It’s not cheap, but the ultra high-tech monorail might be the best way to get around the Strip. It runs for four miles on the east side of the Strip and it connects many major hotels with each other as well as the Las Vegas Convention Center. It’s fast, fun, clean and safe so it may be worth the high price. Children five and under ride for free with an adult.

If you just need a bump down the Strip, there are a few trams that offer service to a very limited number of destinations:

>>Before you arrive in Las Vegas, we can help you figure out how to get to Las Vegas.

Use the widget below to find cheap flights to Las Vegas.