The Arrow Launches on the Strip

There are a bevy of ways to get around while visiting Vegas, including rental cars and the city’s Deuce and CAT buses. Now Vegas.com, the Strip Trolley and the Las Vegas Monorail have partnered together for a new option, called the Arrow. 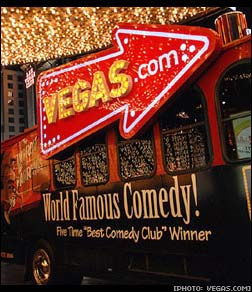 While at first the Arrow may seem similar to the Deuce, in that they both ferry passengers from the downtown/Fremont area all the way down the Strip to the new Town Square shopping center and South Point casino, there are some major differences.

Second, rather just dropping you off at the sidewalk in front of a section of casinos, like the Deuce does, the Arrow actually drops you off at each individual resort on its routes. It also goes slightly off the Deuce’s route to hit non-Strip resorts like Hooters, but stops short of being truly indispensable by not extending out to the Palms, Rio, Orleans and Hard Rock, which are close to the Strip, but just far enough away that most people won’t walk the distance.

The biggest difference, though, is that because the Arrow is run by Vegas.com, a leading online source for purchasing reservations at Vegas shows, clubs and more, each bus features touch-screen TVs that allow riders to access Vegas.com to make dinner reservations and purchase show and club passes, all while on board.

So how does this new service compare to the Deuce price-wise? Both offer one-time, one-way rides for $2.50, but while the Deuce one-day pass is $5 and includes the city-wide CAT public bus system, the Arrow will cost $10 for an all-day pass. However, that $10 will also include unlimited rides on not only the buses, but also on the Las Vegas Monorail, which runs from the Sahara down to the MGM Grand. A one day monorail pass alone is almost $10, so it’s a great value if you want to zip around to a variety of resorts all day.

For more information on the Arrow, including a route map, or to purchase your day pass in advance, you can visit the Vegas.com website. The site also includes a list of locations where you can purchase your passes in person.

I haven’t had a chance to try this new mode of transportation yet, but as far as I’m concerned, with the number of people trying to get around the main tourist areas, an extra option is always a good thing.

Have you taken a ride on the Arrow? Let us know what you thought of it in the comments.