Why the Las Vegas Monorail is a nightmare 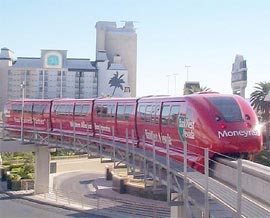 Anyone who has seen the “Simpsons” episode called Marge vs. the Monorail already has a good idea how this story will likely end. To sum it up, a city that has no use for one gets swindled into installing a modern monorail system that seems to go nowhere. In the case of fictional Springfield, it went in a loop around town, and in the case of Las Vegas, it goes back and forth so far behind the Strip that most people don’t even realize it’s there, much less give in to the temptation to ride it.

I would love to report that the Las Vegas Monorail was a valuable part of its future transportation scheme, but unless they can get authority to extend the line to McCarran Airport soon, this thing will probably be closed down or begin collapsing on its own. By the way, the city’s taxi drivers are major opponents of extending the monorail to the airport, which is as understandable as it is sad, since it would certainly put quite a few of them out of work in 2020 or whenever they’d complete the thing.

The thing handles like a Tijuana taxi
When you first hear that a new monorail system has been built in a city drowning in cash, you would naturally expect it to be built somewhere in the NASA/Disneyland range of quality, but nothing could be further from the truth. Once underway, the carriages shake and rattle down the track so much that most people start looking for parachutes and emergency exits, just in case. This might be the biggest surprise of all, that the newest monorail since North Haverbrook’s has been built with all the precision of a prison riot.

It’s way too far from everything
There are 7 stops on the system, and they’ve given each of them the name of something that is vaguely near where you can get on and off the monorail. What isn’t obvious until you actually ride the thing is that each of these stops is situated near the back of these gigantic resorts that all continue to be oriented to their fronts along the Strip itself. Perhaps planners envisioned that these giant hotels would build friendly back entrances with small casinos, bars, restaurants, and shops, but this still isn’t even in the works 4 years after the system has been operating. 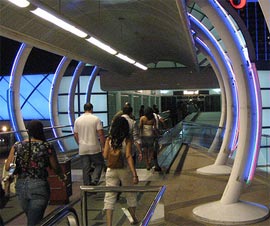 It totally makes sense that these lavish resorts should be built and operated such that their guests come in close contact with gambling opportunities as often as possible. That’s the whole point of them being here. Consider the point just above, that all the casinos still face Las Vegas Blvd, which is more than half a mile away, and then try to use this strategy and you have a situation where paying customers have never felt more like cattle walking through an interminable chute headed for slaughter.

When you get off at a monorail stop, your only choice is to walk through a long series of ramps and walkways that can range from seemingly endless to maze-like. Until you reach the main part of the casino, which is along the Strip itself, you’ve walked or been carried for 10 to 15 minutes, with no alternatives unless you are willing to hurl yourself over the rails on the elevated pathways, almost certainly breaking both your legs.

The worst part is that there are a few things that are actually near the stops themselves, but you can’t get to them. The monorail stop behind the Flamingo Hotel is so close to Batista’s Hole in the Wall (a famous Italian restaurant) that you can practically jump onto its roof from the platform. But once off the monorail you literally have to walk all the way to the Strip, then to the corner, and then all the way back to the restaurant. It’s a 20-minute/1-mile (no joke) walk to reach something you could throw a pebble on from where you were standing when you began. The Hooters Hotel is equally beckoning across from the MGM Grand monorail station, but also an unbelievably long walk in practice.

It’s way too expensive for what it is
If the Las Vegas Monorail was elevated over the center of the Strip itself, it would easily be worth the $5 per ride to zip up and down a street that has come to redefine gridlock in the last decade. But considering the hassles described above, that’s way too much for just a novelty ride that is so out of the way to begin with. For the same $5 you can buy a 24-hour pass on the Deuce Buses that actually do go up and down the Strip 24/7.