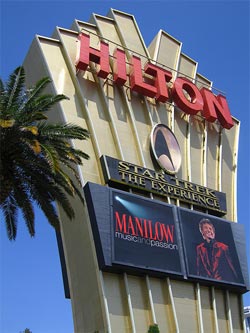 Just as the hotel scene itself has exploded in Las Vegas during the last decade or so, the entertainment scene has exploded as well. The city has called itself the “Entertainment capital of the world” for many years now, but now there is so much more going on that everyone can find something that appeals to them and in their price range if they play it smart.

Free shows along the Strip

Several of the larger hotels along the Strip have ongoing shows that are visible from the sidewalk out front. The Treasure Island and the Mirage are two of the most notable, each with a lavish Disney-style production out front at regular intervals. The fountains in front of the Bellagio are a newer entry on the free Strip entertainment scene. Every fifteen minutes from 7 p.m. until midnight (Earlier in the day the show goes every 30 minutes) a huge choreographed water show erupts along with music and light.

Celine Dion has wrapped up her 3-year run in her own showroom at Caesar’s Palace, but Barry Manilow, Toni Braxton, and Bette Midler carry on with theirs. The lineups will change, but this new trend in permanent performers in dedicated concert venues is sure to continue. And of course touring bands all come through Las Vegas, where they often play multiple nights at large places or occasionally in smaller-than-usual rooms like the Joint at the Hard Rock Café.

Keep your eyes peeled on Lasvegaslogue for upcoming concerts and other shows, but you can also get a current list of all touring acts who are scheduled to come through Las Vegas soon at Pollstar.com.

When most people think of entertainment in Las Vegas they think about the famous shows with showgirls and huge costumes and the like. Those types of shows have greatly expanded in recent years along with the rest of the city so your choices are greater than ever. The most expensive shows can now cost well over $100 per person, but there are many more affordable choices down the line if you are a bit down on your luck.

Thanks to young Hollywood stars on the loose, the Las Vegas nightclub scene has become one of the more famous and most notorious in the world. It’s not always filled with celebrities and their posses, but you stand a decent chance of seeing a famous person if you hit one of the top clubs on a weekend night.

Las Vegas has been called Sin City for many decades so it should be no surprise that the town has more than its fair share of strip clubs or gentleman’s clubs or whatever you want to call them. Some of them are fairly mild and many of them feature totally nude dancers. Try to figure out where you want to go before you ask the taxi driver or you’ll end up in the place he gets the most commission out of dropping you in front of.