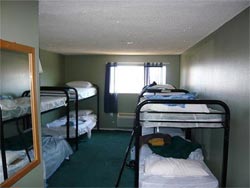 Let’s face it, with hotel rooms available for a dime a dozen, most people don’t seek out hostels in Las Vegas. Nonetheless, as of early 2008, there are three official hostels in Sin City. These places all have dorm beds that can be booked individually as well as private rooms with a similar set up. There is a strict rule in Las Vegas that hostels can only be occupied by out-of-state guests, but it’s best to confirm this ahead of time. These are the cheapest beds in an unusual city, and owners don’t want busted gamblers and other hardship cases staying in these places.

What to Expect at a Las Vegas Hostel

All three places have quite a bit in common, so it’s easiest just to go over those things once. All three used to be motels, meaning they used to be cheap hotels where guests could park their cars more or less in front of their room door. The Las Vegas motels are not as busy as they once were, so these places have made the transition into housing (primarily) international travelers, although their facilities are still very similar to their previous incarnations.

All three also have less than ideal locations. That’s actually putting it mildly. It’s not that they are ten miles out in the desert, but they are in seedy parts of town. Most guests won’t feel too comfortable wandering around these parts during the day, much less late at night. Public transportation in the areas is pretty good, and those who have their own car should be okay, but these cheap beds come with a price that might not be too obvious. At about 98% of the hotel rooms you could book in Las Vegas, you can leave your car where it is for the duration of your stay. Most of the Las Vegas Strip hotels are next to each other, so walking between them can be a safe and interesting way to spend a day. Alcohol flows cheaply or freely in this city, so being on foot has many advantages. If you choose to stay at a hostel in Las Vegas, you will not have that freedom.

USA Hostels Las Vegas – This hostel is located in the downtown area, although it’s eight suspicious and seedy blocks from the main and busy part of downtown. It has a nice pool, and the people running it are friendly and accessible. If you can put up with the weird walk to the Fremont Street Experience area, this is your best choice for easy access to cheap food, cheap (or free) drinks and gambling opportunities without insanely high minimums.
>>More information on the USA Hostels Las Vegas

Sin City Hostel – This is the smallest and oldest of the three hostels, but it’s got a really good reputation so it’s a solid choice if you’re looking for a hostel in Las Vegas. It advertises that it’s “on” the Las Vegas Strip but it’s really not. It’s way north of everything interesting and is mixed in with some really sketchy businesses where odd people walk back and forth all day. Again, it’s a nice place, but the location isn’t great.
>>More information on the Sin City Hostel in Las Vegas

HI – Las Vegas – Tod Hostel – This place is a Hostelling International property and only became a hostel in early 2008. There are 80 beds on site making it the largest operating hostel in the city. There is a nice pool in the center of the complex, and there are frequent parties held there so meeting other travelers can be easy. This hostel is on the northern end of Las Vegas Boulevard and is within walking distance to the Stratosphere, but if you want to get to the heart of the Strip or head north into downtown, you’ll probably need to take a cab or hop on public transportation.
>>More information on HI – Las Vegas – Tod Hostel

All three hostels in Las Vegas have beds in dorm rooms starting around $20.00 per night with prices increasing to about $25.00 per night on weekends or during busy periods. They each also rent out private rooms for a similar price per person, so you can expect to pay about $40.00-$50.00 for a private room for two people.

Is a Las Vegas Hostel Right for You?

There are two factors that complicate this question in Las Vegas. First off, as previous mentioned, the Las Vegas hostels are not in ideal locations, and this is a city where location is very important. The other factor is that rooms at the real hotels can often be surprisingly cheap, so you might not actually save much (if any) money at a hostel.

If you are part of the hardcore hostel backpacker crowd, however, these places can be quite fun and they are good places to meet other travelers. It may not hurt to look at other Las Vegas hotels or even scan the Las Vegas deals page, which frequently lists promotions with truly rock-bottom prices.

When Hostels are a Good Deal

Las Vegas tends to be very seasonal with its hotel prices. Every weekend and every major American holiday draws crowds and usually results in higher prices, so it’s much harder to find a good deal at an actual hotel during those times. The week after Christmas is the absolute peak for hotel crowds, while the three weeks leading up to Christmas are dead. Winter and spring tend to be very full, but starting in June the week days in Las Vegas are pretty. These quiet periods are good times to find better deals at nicer places. Since the hostels don’t change their prices much through the year, it’s best to check for cheap hotel deals and then book your hostel bed if that doesn’t pan out.