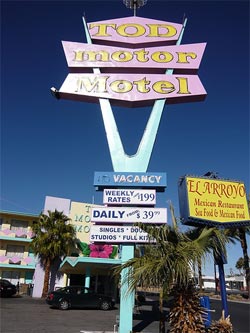 The newest of the three actual Las Vegas hostels shares much in common with the other two in both good and bad ways. This is the largest of the three by a bit, and it’s the most recently renovated so there is a lot to like here, but the location is a bit of a problem, just as it is at the other two hostels.

This was one of the more iconic Las Vegas motels as recently as 2006, and part of the business continues to operate in that manner. You might find it slightly confusing that the big sign out front still says “Tod motor Motel” even though it’s officially known as AAE Todd’s Hostel now. This is because the original sign is considered a city landmark so the owners have been asked to keep it as it is. There’s also a pool area just behind the first building, so you’ll have easy opportunities to take a dip and meet some fellow hostel guests as well.

Just as with the other two Las Vegas hostels, the Todd is located in an area that has seen better days. It’s actually just down the street from the Sin City Hostel, so the problems and situation are identical. For decades this part of the Las Vegas Strip has been ignored by developers, and things have actually gotten slightly worse in recent years.

The bottom line is that nothing you’ll want to see or do while in Las Vegas is within reasonable walking distance, and everything that is close by is a bit seedy, although the nearby Olympic Gardens strip club is quite nice inside and one of the finest of the Las Vegas strip clubs. If you’ve got a car this area is okay, and it’s not particularly dangerous, but it’s also not as ideal as the many Las Vegas Strip hotels where you can leave your car and walk everywhere. 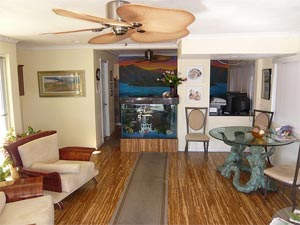 If you are on foot things aren’t too bad due to the fairly efficient service of the new Deuce Bus service that connects every major place on the Strip as well as Downtown Las Vegas, which is a couple miles in the other direction from the Todd. You can get a day pass for the buses for $5, and then ride them all day, which isn’t a bad deal, but again, nothing cool or interesting is within 2 miles or so, and there are a lot of weird people always hanging around in this general area. You won’t get robbed or shot at, most likely, but you won’t feel terribly welcome either.

Since this has only been a hostel since early 2008, they are still sorting some things out, but they are off to a really good start and the reviews have been positive. The staff are friendly and helpful, and all in the 20-something age range that most hostel guests tend to be in. The pool in the center of the property is a nice hang out, and they have BBQs and events nearly every night, so meeting other guests is made easy.

These were motel rooms very recently, so they all have their own bathroom. The beds are all bunks, which is typical of many worldwide hostels. They have either 1, 2, or 3 bunks per room, for a total of 2, 4, or 6 beds per room. The Todd also continues to rent out reasonably priced motel rooms, which are similar to the dorms but with more traditional hotel furnishings and some even have kitchenettes.

Beds at the Todd start at $19 and are only higher during holidays. The motel rooms have larger beds and TVs, and start at $39 per night for a single.

Map of the AAE Todd’s Hostel (more photos below) 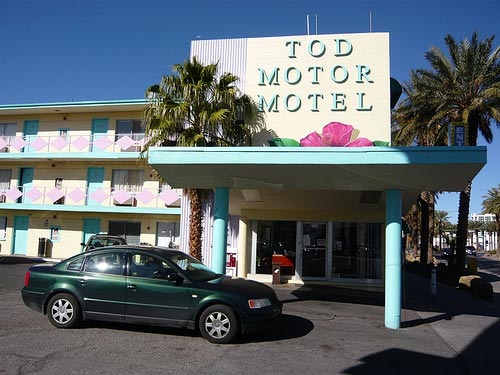 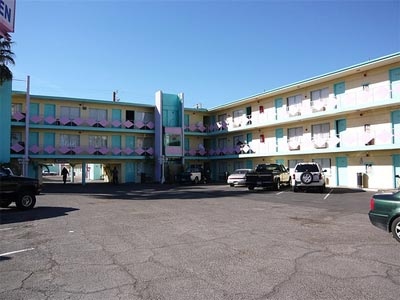