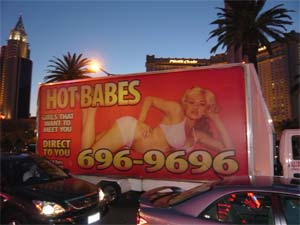 Everyone needs companionship and for some reason many people who visit Las Vegas seem to need it more than people who visit other cities in the United States. Prostitution in Las Vegas is a hot topic, even though it’s not actually legal anywhere in Clark County, which contains Las Vegas and all the surrounding cities as well. Prostitution is, however, legal in 11 of Nevada’s smaller counties, including one about 60 miles northwest of Las Vegas. More information on legal prostitution is available on the Las Vegas Prostitution page.

Escorts are still common in Las Vegas itself, just as they are in nearly every other large city on earth. And this isn’t all some code that implicitly says escorts are prostitutes in Las Vegas. This is a major bachelor party destination and people hire dancers and other entertainers for private parties in hotel rooms every day. There are definitely stories out there about some Las Vegas escorts performing services with clients that might go beyond what some people would consider “escorting”, but that’s between the client and the entertainer and unlike the escorts in Amsterdam, it’s also illegal in Las Vegas itself.

Even people who aren’t really needing companionship tend to be curious how much an escort in Las Vegas would cost, so we’ll try to take some of the mystery out of the topic here. The short answer that will satisfy no one is that each escort sets their own price each time they make an appointment. There tends to be a price settled upon up front for them to come to your hotel room, and then if you want something extra special that might be an additional cost.

There are at least 5 main ways of contacting escorts in Las Vegas, and each is quite a different situation. There are many horror stories from people who were expecting one thing and got another, or were literally robbed in the process, so you don’t want to be careless about this. The thieves are well aware that they can take nearly everything you have and there’s almost no chance of you reporting the crime, so someone hiring an escort needs to be cautious.

Particularly if you hang around in nicer bars at casinos on the Las Vegas Strip, and especially if you look like you might have a bit of money with you, it’s definitely possible that an escort will find you. They tend to be very attractive and charming because they have to convince you to hire them on the spot. There are legitimate escorts who find clients this way, but there are also thieves doing more or less the same thing. It can be very difficult to be sure about any of this, but the price of someone you meet in a bar will usually start at $200 or so. And since these escorts don’t have fixed prices they will obviously try to get as much as they possibly can out of a client. More attractive ones will certainly have more leverage and might want much more than $200, but it’s up to the client to negotiate. 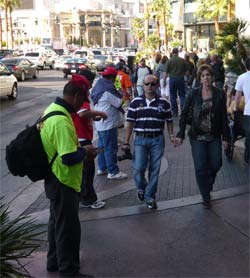 If you walk up and down the Las Vegas Strip you’ll see dozens of people trying to hand you little cards. Some are passes for the many strip clubs in Las Vegas or for nightclubs, and others will be for escort agencies. There are other ways you might be propositioned by an agency, and they mostly tend to offer fantastic bargains, but don’t believe it. There are cards on the Strip that say for $39 a girl will come to your room, and that might be true, but they will also come to your room telling you that you owe them $211 more dollars because the agency fee is $250 for entertainment, and even more depending on what you are after. Since agencies take half the fee or sometimes more, the escorts usually start around $250 and go up from there. A recent trend has been giant moving billboards that drive up and down the Strip with an escort service ad on the side. You can’t miss them if you spend any time outside.

If you search the internet on this subject you’ll no doubt find many Las Vegas escort sites and agencies. Most of these online escort sites specialize in high-end entertainment, with prices to match, of course. You should expect to pay a minimum of $300 for a visit from someone on web agency, but $500 might be a more realistic price for many of them. The photos of the girls nearly always portray who they are sending, so it’s a simple game of supply and demand. A stunning escort might ask for $1,000 while one who doesn’t turn as many heads might ask for $300 or possibly even less. In Las Vegas there are also quite a few former porn stars who now work as escorts. Yes, it’s really them, although older than in their films, and $750 is about the minimum you could expect to pay, but many are well over $1,000 to make an appearance at your hotel room.

Escorts from magazines found in news boxes in Las Vegas 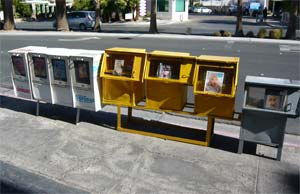 If you walk through some of the less glamorous parts of the Las Vegas Strip and the streets around it you’ll come across newspaper boxes filled with what some people call “bachelors guides”. There are many different free magazines in these boxes, although nearly all of them are owned and filled by the same company. These magazines have ads for strip clubs and nightclubs, but mixed in they have “personals ads” that are placed by escorts. They all have photos, but in some cases the photo is actually of a famous model or someone else that you know isn’t really going to answer the phone if you call the number listed.

Nevertheless, there are real escorts placing those ads and in most cases they work independently rather than through an agency. For this reason it’s possible to hire an escort for a cost starting around $150. That’s basically the minimum cost for them to show up at your hotel room and entertain you, but in some cases there may be higher prices depending on the dance routine you request and so forth.

IMPORTANT – Will the entertainer match the photo?

But the controversy gets worse in some cases, as we’ve heard reports recently that someone requesting a particular fair-skinned blond in a photo was surprised to find a black woman soon knocking at the door. Even more surprisingly, the black escort still insisted she was the blond in the initial photo. A second attempt through the same agency yielded an almost as ridiculous result, so be warned that some agencies take their clients for fools and/or assume things will work themselves out anyway.

There’s no easy way to be sure of how these transactions might go, but it’s important to not let yourself be taken advantage of this way. If someone shows up who’s obviously not what you requested and were promised, you can and should send them away, or it just encourages these companies to victimize future customers.

Though there are 5 ways here to meet escorts, and that’s not even counting the legal prostitutes working at the legal brothels, that doesn’t mean there are 5 separate groups of escorts. It’s very likely that many entertainers could be involved in 3 or 4 of the different systems mentioned, so depending on how you contact them the cost might be different for basically the same thing.

And again, prostitution is illegal in Clark County and they take this law seriously so don’t get caught in a misunderstanding.