It may be titled The Showgirl Must Go On, but unfortunately, Bette Midler‘s show at The Colosseum at Caesars Palace won’t. 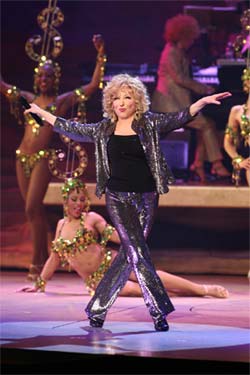 Midler has announced that she is ending her two-year run as a headliner on The Strip, with her final show on January 31, 2010.

The singer/actress first debuted the show at Caesars Palace on February 20, 2008. At the time, she was signed to a two-year contract, and it appears she has decided not to extend beyond that. Part of that seems to have to do with Midler’s work on her upcoming CD.

“What a fabulous two years this has been, and I thank AEG and Caesars Palace for the best partnership a showgirl could imagine. Who knows? These legs have had such a great run in the desert—it may be time to haul them to places with more humidity and fewer slot machines. But first I need to finish recording my album of the sexiest new love songs that only a showgirl could sing,” stated Midler in a press release.

Fewer slot machines? Why Bette, was that a dig at Las Vegas?

Anyways, if you’d like to see The Divine Miss M one more time in her fabulous show, here are the remaining dates at Caesars Palace:

The big question now is what will Caesars Palace do for a resident headliner? Elton John ended his show earlier this year, and Cher has yet to announce any 2010 dates for her show, which ends the year on December 20.

If you had to pick, who would you like to see as a headliner at The Colosseum?